Here is the issue:

Democrats want to shift toward taxing wealth, instead of just  salaries and the income assets generate

– Believe us! They’ve got a plan…Socialists and Communists always have a Plan…but their people always suffer greatly from it 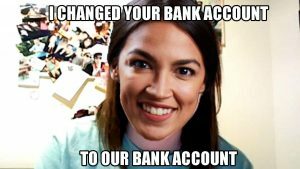 – It’s a Simple Plan: Let’s say you’ve been a thrifty person and over the course of years of work and saving, you’ve accumulated a nice collection of ‘investments’, or “assets”..stocks, some real property (maybe a ‘vacation cabin’), perhaps even a ‘collectible’ or two that increased in rather significant value over the years (As an example, maybe a few pieces of jewelry that’s been in your family for generations, handed down from one to the next…that you have insured…that’ll help the taxman).

– Every one of the Democratic Presidential candidates has their own “unique” version of “the plan”.

– To take just one, though, “Liz” Warren’s version is one of our favorites; you know ‘Liz’ (maybe better by her Indian name); She has a ‘plan’ for everything!

– With Liz’s plan, unlike some of those of her fellow candidates, someone in your circumstances (as outlined), it wouldn’t matter whether those “assets” of yours continue to grow or shrink! You would pay a tax on the value of those assets every year.

– Let’s say for the sake of illustration, that you’ve worked hard at a job, say, in the skilled trades, for 30 years or so. You’ve saved and spent wisely, planned for a comfortable and happy retirement. As a result you’ve accumulated savings, modest investments that have done well, and enjoy a a nice asset base.

– When it’s all totaled up, you gaze proudly on assets of $500,000, including a ‘lump sum’ pension payment from your employer, and your Social Security.

– But remember, Liz has a lot of free stuff she’s giving out that she must find a way to pay for. Lotta kids going to college, lot of migrants are needing health care and shelter and education, and so on. There’s where you come in.

– President Liz’ll check out your “wealth” and, in her ‘compassion’, knowing that if you didn’t, at least a lot of your friends and neighbors did vote for her, and she’ll know that you must want to share some of that “wealth” with those ‘less fortunate than you’.

and put it toward paying for the ‘free stuff’ she promised.

BUT WAIT! FORGIVE ME. I’M WRONG. LIZ’S “PLAN” APPLIES THAT “WEALTH TAX” ONLY TO THE “SUPER-RICH”…2% FOR THOSE WITH ASSETS ABOVE $50 MILLION, 3% FOR ASSETS ABOVE $1 BILLION

– Come on America. Let’s be real, here. Anybody really believe, once a “wealth tax” is implemented that, over time (and not a ‘long time’),  the amount of wealth to which it’s applied will not be lowered and the percent of tax will not be increased?

That’s the ‘great’ thing about socialism/communism. It needs more and more of ‘other’ peoples’ money to keep buying votes…until, eventually…they no longer want or have ‘free elections’!    DLH 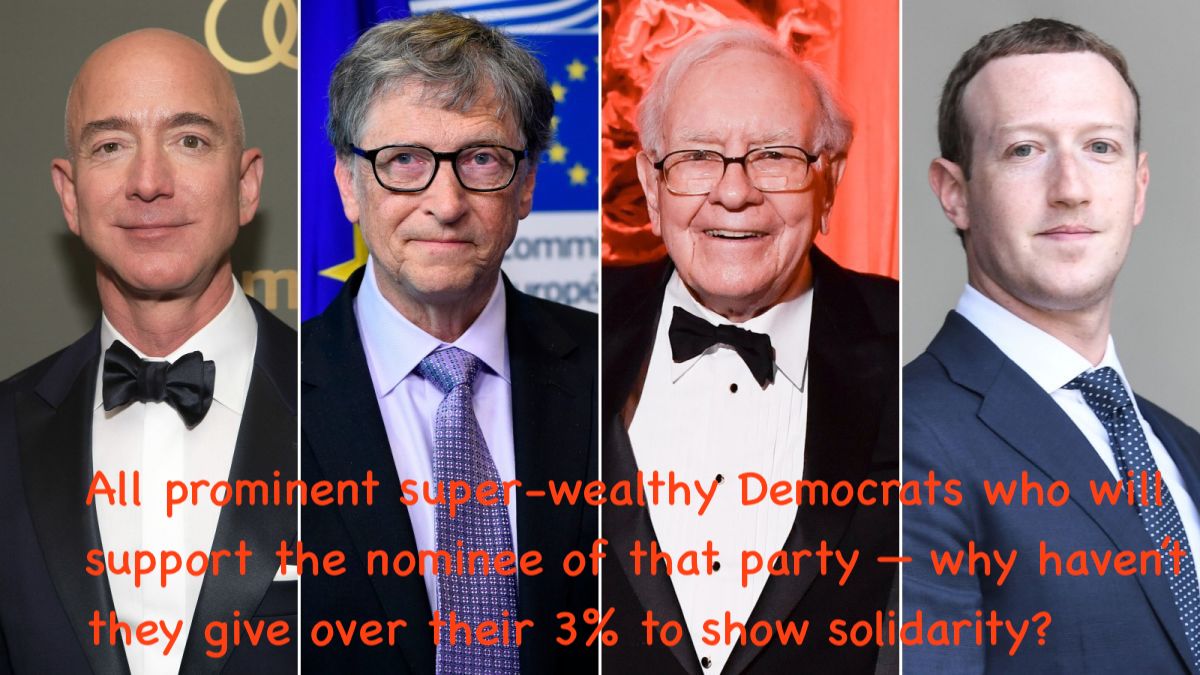 By Richard Rubin from the Wall street Journal, Wednesday, 8/28/19:

The ultra-rich woul lived modestly, saved your money, chose wisely in buying  pay whether they make money or not, whether they sell assets or not and whether their assets are growing or shrinking.

Ms. Warren, who draws cheers at campaign events when she mentions the tax, would impose a 2% tax each year on individuals’ assets above $50 million and a further 1% on assets above $1 billion. Fellow candidate Beto O’Rourke has also backed a wealth tax, and it is one of Vermont Sen. Bernie Sanders ’ options for financing Medicare-for-All.

Ms. Warren’s plan appeals to some Democrats because it would raise a lot of money from a tiny number of people. According to economists working with her campaign, it would generate $2.75 trillion over a decade from 75,000 households. That would be roughly a 6% boost in federal revenue from under 0.1% of households.

For Democrats, the Warren plan has advantages: Money would come only from the very wealthiest. The IRS could focus enforcement on very few people. Revenue would come quickly.

The income tax is the Swiss Army Knife of the U.S. tax system, an all-purpose policy tool for raising revenue, rewarding and punishing activities and redistributing money between rich and poor.

The system could change fundamentally if Democrats win the White House and Congress. The party’s presidential candidates, legislators and advisers share a conviction that today’s income tax is inadequate for an economy where a growing share of rewards flows to a sliver of households.

For the richest Americans, Democrats want to shift toward taxing their wealth, instead of just their salaries and the income their assets generate. The personal income tax indirectly touches wealth, but only when assets are sold and become income.

At the end of 2017, U.S. households had $3.8 trillion in unrealized gains in stocks and investment funds, plus more in real estate, private businesses and artwork, according to the Economic Innovation Group, a nonprofit focused on bringing investment to low-income areas. Most of the value of estates over $100 million consists of unrealized gains, said a 2013 Federal Reserve study. Much has never been touched by individual income taxes and may never be.

Democrats are eager to tap that mountain of wealth to finance priorities such as expanding health-insurance coverage, combating climate change and aiding low-income households. Their ideas range from new rules on inherited assets, to a plan by Sen. Ron Wyden for annual taxes on unrealized gains, to a proposal from Sen. Elizabeth Warren to tax wealth itself. These come atop more conventional proposals to raise income taxes and expand estate taxes.

“The whole tax system is stacked in favor of the tax-avoidance crowd,” said Mr. Wyden, who would lead the tax-writing Finance Committee if Democrats retook the Senate. “When you stand up and you say, hey look, you’ve got one system for a cop and a nurse and another for highfliers to pay what they want to, when they want to, everybody nods.”

The Democratic debate on taxing wealth is one facet of a bigger, often contentious discussion. Experts across the political spectrum agree income inequality widened in recent decades, and wealth inequality even more. There is little agreement on what, if anything, the government should do about it.

Many on the right believe narrowing the gap between the rich and middle class matters less than raising the incomes of the middle class. That, they say, calls for measures to boost investment and educational opportunity. Many conservatives argue that taxes targeted at the rich could hinder investment in ways that would hurt everyone’s wages and discourage the creation of wealth in the first place.

New taxes on wealth would complicate tax administration and bring unknown economic consequences. “It would be incredibly disruptive to markets,” said Sen. John Thune (R., S.D.). “People would start looking for how to game it and ways to shield and shelter.”

Liberals, by contrast, see extreme inequality as morally wrong and socially divisive, and regard the current system, which taxes income generated by wealth more lightly than wages, as especially objectionable and a contributor to wealth gaps between blacks and whites.

While the current income tax is already progressive—rates are higher for people whose income is higher—Democrats say progressivity breaks down at the very top because reduced corporate taxes, preferential rates for capital gains and a narrowed estate tax are especially favorable to the wealthiest Americans. If Democrats gain unified control of government in 2021, rich households, including heirs living off inheritances and company founders compensated with stock, will be in the crosshairs.

Instead of attacking favorable treatment of inherited assets, Mr. Wyden goes after the other main principle of capital-gains taxation—that gains must be realized before taxes are imposed.

The Oregon senator is designing a “mark-to-market” system. Annual increases in the value of people’s assets would be taxed as income, even if the assets aren’t sold. Someone who owned stock that was worth $400 million on Jan. 1 but $500 million on Dec. 31 would add $100 million to income on his or her tax return.

The tax would diminish the case for a preferential capital-gains rate, since people couldn’t get any benefit from deferring asset sales. Mr. Wyden would raise the rate to ordinary-income levels. Presidential candidate Julián Castro also just endorsed a mark-to-market system.

For the government, money would start flowing in immediately. The tax would hit every year, not just when an asset-holder died. Mr. Wyden would apply this regime to just the top 0.3% of taxpayers, said spokeswoman Ashley Schapitl. Mr. Castro’s tax would apply to the top 0.1%.

The most ambitious plan comes from Sen. Warren of Massachusetts, whose annual wealth tax would fund spending proposals such as universal child care and student-loan forgiveness.

The ultra-rich would pay whether they make money or not, whether they sell assets or not and whether their assets are growing or shrinking.

Ms. Warren, who draws cheers at campaign events when she mentions the tax, would impose a 2% tax each year on individuals’ assets above $50 million and a further 1% on assets above $1 billion. Fellow candidate Beto O’Rourke has also backed a wealth tax, and it is one of Vermont Sen. Bernie Sanders ’ options for financing Medicare-for-All.

Ms. Warren’s plan appeals to some Democrats because it would raise a lot of money from a tiny number of people. According to economists working with her campaign, it would generate $2.75 trillion over a decade from 75,000 households. That would be roughly a 6% boost in federal revenue from under 0.1% of households.

For Democrats, the Warren plan has advantages: Money would come only from the very wealthiest. The IRS could focus enforcement on very few people. Revenue would come quickly.

“Look at Mark Zuckerberg, ” said Gabriel Zucman, an economist at the University of California, Berkeley, who advised Ms. Warren, speaking of the Facebook Inc. founder. “Are you going to wait 50 years before you start taxing him through the estate tax?”