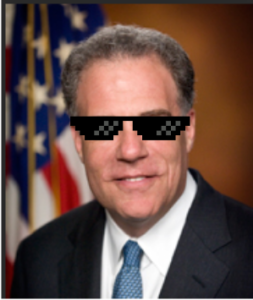 At RedState by Streif:  (excerpt) (bold our emphasis)

Don’t Look for What Questions the DOJ IG Report Asks, Look for the Ones It Avoids

Here are some key points to keep in mind. Much is being made of Horowitz being “non-partisan.” This may very well be true but he seems to clearly be an institutionalist who is just as focused on protecting the brand of the Department of Justice as he is on revealing the truth to his employers, that would be you and me, the taxpayers. To that end, I would be shocked if he found anything really wrong anywhere rather than focusing on screw-ups and malfeasance of individuals and giving the benefit of the doubt to the actions of DOJ’s National Security Division which managed the investigation of the Trump campaign.

Expect the FBI to be largely exonerated other than findings of bad acts by rogue actors or well-intentioned over-zealousness. I’ve read that Horowitz may not find any partisan motive in the actions of Strzok and Page and would not be shocked as it may well be possible to say that their actions were justified by the facts available to them despite their political bias. This, I think, is the clear canary in the coal mine test for the entire report. A finding of no bias in the most egregious cases and a treating of all other malfeasance, like the forging of a court document, as an individual factoid rather than as part of a fact pattern is a clear sign that the objective is to protect the Department of Justice and protect the FBI.  . . .

This we found particularly chilling by implication . . .

These documents also tell us the FISC routinely includes authorization in their warrants for the government to surveil people in contact with their target, and people in contact with the contact; in a scheme referred to as “chaining,” these authorizations will include 2 or 3 “hops.” While the text of the Carter Page warrant application, and court approval, remain a secret, one shudders to think this authority was used to spy upon other members of the Trump campaign team who were in contact with Page. (The memo of the House intelligence committee’s Democrats about the warrant suggests that some unknown number of Trump campaign advisors were the subject of FBI “sub-inquiries.”)

The report should clear up the extent to which the Steele Dossier was used to undertake an unprecedented investigation of a major party candidate for president and how that fraudulent document was laundered.

There is a claim being made everywhere on the left that the FISA warrant issued concerning Carter Page would have been justified without the Steele Dossier and without an FBI attorney falsifying a court document. If so, we need to know what that evidence was and why Carter Page has not been charged with either lying to Congress, lying to federal agents, or with violating FARA. If the threshold for justifying such an intrusive warrant is possible against a demonstrably and proven innocent American, then the whole system is flawed beyond redemption. We also need to understand why Rod Rosenstein continued a warrant that probably allowed surveillance of the President of the United States.

There have been stories that Attorney General William Barr is not satisfied with Horowitz’s findings. I don’t know if that is true and I certainly haven’t seen it reported by anyone who hasn’t been up to their eyebrows pushing Russia Hoax crap and Fusion GPS spank material for three years. I suspect that Barr might well disagree with some of Horowitz’s findings because his man, Connecticut US Attorney John Durham, is conducting a criminal probe over multiple agencies and has access to much more information than does Horowitz. You need to look at these stories as being a repeat of the disinformation pushed by the press that Barr’s summary of Mueller’s report reflected Barr’s intentions to protect the President and misrepresented Mueller’s report. If he doesn’t buy all of Horowitz’s findings, then they will simply say, “here he goes again.” Or that Durham is investigating “debunked’ “conspiracy theories.”

The salient question is this: If the FBI did have reason to suspect that the Trump campaign contained one or more people in senior positions who were actively working with a foreign government that was not Ukraine, then why was Donald Trump, the candidate, never briefed on the problematic staffer and given the chance to fire him but rather subjected to a degree of political espionage by the federal government that the US has not known since the break-in at the Watergate in 1972?

Inspector General Michael Horowitz’s investigation was limited in scope and thus will leave unanswered many of the questions surrounding the FBI’s targeting of the Trump campaign.

the foremost question the IG’s report should address concerns the DOJ’s basis for believing that probable cause supported the Page FISA applications. Because Page is a U.S. citizen, to obtain a surveillance order under FISA, “the DOJ needed to establish probable cause that Page was ‘an agent of a foreign power’ and was engaged in ‘activities [that] involve or may involve a violation of the criminal statutes of the United States.’” And “probable cause needed to exist for the initial October 21, 2016 warrant and for each subsequent renewal.”

2. What Criminal Allegations Existed Against Page?  . . .

This analysis will be key because everything known to date indicates the DOJ’s FISA applications failed to present evidence sufficient to establish probable cause that Page violated U.S. criminal law . . .

The Woods procedures, named after FBI agent Michael Woods, “were instituted in April 2001 to ‘ensure accuracy with regard to … the facts supporting probable cause”  . . .

This area of the IG’s report should be massive given the many concerns already identified in congressional testimony and exposed in publicly released documents.  . . .

6. Hiding the Steele Dossier Commissioners From the Court  . . .

These are merely the questions begging for answers from the already publicly available information, but Horowitz had access to substantially more details and his investigation should have uncovered even more facts. Horowitz’s report should summarize the results of his investigation to make clear that he followed the leads where they led.

One investigative trail of particular importance is the communications accessed and intercepted pursuant to the FISA applications. Did the FBI access communications between Page and Trump campaign members? If so, what communications, involving what players?

If Horowitz conducted a fair and thorough investigation, he should have the answers to these questions—and so should we soon.