After Horowitz report, matter now in Barr’s and Durham’s hands 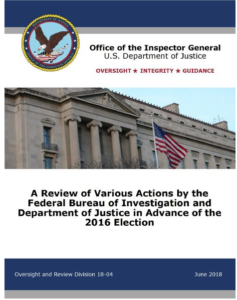 Dershowitz – diGinova – Cleveland – Attkisson –– Many important points are being made about Inspector General Horowitz’ report, dropped this week, as it is combed through by various analysts. Most of the liberal ones are keeping their mouth’s shut out of embarrassment.

The 500 page or so report (pdf format) can be downloaded in its entirety at this link.  There is an executive summary at the beginning.

Articles, excerpts and new developments that took our eye:

A Supreme Court decision this week agreeing to take up (and thus forestalling) attempts by Democrats to muck around in  Trump’s private tax returns (special thank you notorious RBG) provides a key argument against one of the two articles of impeachment proffered out of the Democrat controlled House Judiciary Committee yesterday.

Elizabeth Vaughn at RedState highlights a compelling argument by liberal law professor Alan Dershowitz. In short the SCOTUS has indicated Trump has an argument about declining to facilitate fishing expeditions by political rivals so a charge of “obstructing justice”is undercut

Harvard Law professor Alan Dershowitz sees this as a huge win for the President. In a Friday night appearance on “Hannity,” Dershowitz explained.

Look, the most important development happened today. The Supreme Court of the United States absolutely pulled the rug out of part two of the impeachment referral by granting certiorari, by granting review in a case where Trump challenged a congressional subpoena. And the Supreme Court said we’re going to hear this case.…Think of what that message is – It’s Trump was right.

You don’t have to comply with a subpoena of Congress unless a court tells you you have to comply. Now, we don’t know how the Supreme Court is going to come out, but they made it clear that’s a viable issue. So that charge, that ground of impeachment, should be immediately removed by the House and not sent to the Senate. There’s nothing to it anymore after the Supreme Court today said you’re entitled to a review on an issue when the President challenges the subpoena power of Congress. It’s all done. It’s over.

Joe diGenova: I would say explosive and I would say for people at the highest levels of the FBI and at the highest levels of the Justice Department, more important at the Justice Department, it’s going to be devastating. It’s going to ruin careers, it’s going to make people have bar problems… What’s clear now we know is that the senior levels of the Obama Justice Department were complicit in knowingly submitting materially false applications to the FISA Court for an illegitimate counterintelligence purpose. Not for a legitimate purpose but to spy on Americans for political purposes. And it really will end up being the beginning of the greatest political scandal in history. And it’s being held up partially because of John Durham’s new grand jury exists for one reason and one reason only – because people are going to be indicted.

Margot Cleveland at The Federalist explains:

The closing of the final inspector general investigation into the Russia collusion investigation promises to open the flood gates for previously undisclosed information and indictments.

Sharyl Attkisson at The Epoch Times:

In each of two video appearances, on NBC News and at Wall Street Journal’s “CEO Council,” Attorney General William Barr provided the same basic information and views about the U.S. intelligence community’s actions against the Trump campaign in 2016 and 2017. A criminal investigation is underway and being led by U.S. Attorney John Durham.

Barr was motivated to make the public statements, he said, by the misreporting and confusion surrounding Justice Department Inspector General Michael Horowitz’s report issued on Dec. 9. It found serious government surveillance abuses but no evidence of political bias on the part of the offending FBI officials and agents.

Below are 24 points Barr felt the need to make after the release of the Horowitz report. (All of the information is attributed to Barr.)

1. Don’t expect Durham’s findings to be announced before late spring or summer 2020.

2. The FBI did spy on the Trump campaign. That’s what electronic surveillance is.

3. Regarding the FBI’s actions in surveilling Trump campaign associates, it was a “travesty” and there were “many abuses.”

4. From “day one,” the FBI investigation generated exculpatory information (tending to point to the targets’ innocence) and nothing that corroborated Russia collusion.

5. It’s a “big deal” to use U.S. law enforcement and intelligence resources to investigate the opposing political party, and I cannot think of another recent instance in which this happened.

6. Evidence to start the FBI’s investigation into Trump associates was “flimsy” from the start and based on the idea that Trump aide George Papadopoulos expressed he may have had pre-knowledge of a Democrat National Committee computer hack. However, it was actually just an offhand barroom comment by a young campaign aide described merely as a “suggestion of a suggestion, a vague allusion” to the fact that the Russians may have something they can dump. But by that time, May 2016, there was already rampant speculation online and in political circles that the Russians had hacked Hillary Clinton’s emails in 2014 and that they might surface. So the idea that Papadopoulos’s comment showed pre-knowledge of the Democratic National Committee hack and dump “is a big stretch.”

7. It was “wrong” for the FBI to presume the Trump campaign was part of a plot. They should have gone to the campaign and discussed their suspicions.

8. The normal thing to do would be to tell the campaign that there could be attempted foreign interference. There is no legitimate explanation as to why the FBI didn’t do this. The FBI’s explanation for this was that they only do “defensive briefings” if they’re certain there’s no chance they’re tipping someone off. But this simply isn’t true, isn’t plausible, and doesn’t hold water because our intelligence officials and President Barack Obama repeatedly contacted the Russians, the guilty party, to tell them to “cut it out.”

9. If the purpose were to protect the election, you would have given the Trump campaign a defensive briefing. You could have disrupted any foreign activity in time to protect the U.S. election.

10. As to the FBI’s motive, “that’s why we have Durham.” I’m not saying the motivations were improper, but it’s premature to say they weren’t.

11. The inspector general operates differently as an internal watchdog. Horowitz’s approach is to say that if people involved give reasonable explanations for what appears to be wrongdoing, and if he can’t find documentary or testimonial evidence to the contrary, he accepts it.

14. All of the information from this surveillance came back exculpatory regarding any supposed relationship to Russia and specific facts. But the FBI didn’t inform the Foreign Intelligence Surveillance court, which approved wiretaps against former Trump campaign volunteer Carter Page four times.

15. At one point early on, the FBI didn’t have enough probable cause for a wiretap warrant, so it took the “Steele dossier” information against Trump, “which they’d done nothing to verify,” and used that to get the wiretaps.

16. The wiretaps allowed the FBI to go back and capture Page’s communications, emails, and other material from weeks, months, and even years ago.

17. Should the four FBI applications to wiretap Trump campaign aide Carter Page have ever been made, considering there were 17 critical omissions or errors by the FBI making it appear they had better evidence than they had? This is the meat of the issue, and “if you spend time to look at what happened, you’d be appalled.”

18. The FBI withheld from the court all of the exculpatory information and the lack of reliability of the main FBI source, Christopher Steele, who was being paid by the Democratic National Committee and the Hillary Clinton campaign to find evidence connecting Trump to Russia.

19. The major takeaway is that after the election in January, the FBI finally talked to one of Steele’s important sources to try to verify some of the “dossier” information and sourcing, as they’re required to do. This Steele source told the FBI he didn’t know what Steele was talking about in the dossier, and that he’d told Steele that the information he’d provided was “supposition” and “theory.” At that point, “it was clear the dossier was a sham.” Yet the FBI didn’t tell the court, and continued to get wiretaps based on the dossier.

20. Further, the FBI falsely told the court that Steele’s source had been proven reliable and truthful. In fact, what the source had told the truth about was that “the dossier was garbage.” It’s hard to look at this “and not think it was gross abuse.”

22. Are people going to be held accountable, including at the very top of our intelligence agencies and FBI? Well, they’re all gone.

23. The whole Russia collusion hype was a “bogus narrative hyped by an irresponsible press” that proved entirely false in the end. Are former FBI Director James Comey and former FBI official Andy McCabe and others implicated in the Durham investigation? I think there was a failure of leadership in that group. Quoting the inspector general, the explanations he received “were not satisfactory. You can draw your own conclusions.”

24. Why haven’t we already thrown people in prison? “These things take time.” The government has to have proof beyond a reasonable doubt before we indict; it’s a substantial hurdle. Nobody is going to be indicted and go to jail unless that standard is met.

In his interviews this week, Barr provided a treasure trove of information about what stands to be one of the most important investigations into our U.S. intelligence community of our time. His signposts indicate that we can expect a shakeup of a system that may have been broken for decades.