Punishment fit the crime? — not by Judge Van Marel in Story County Iowa 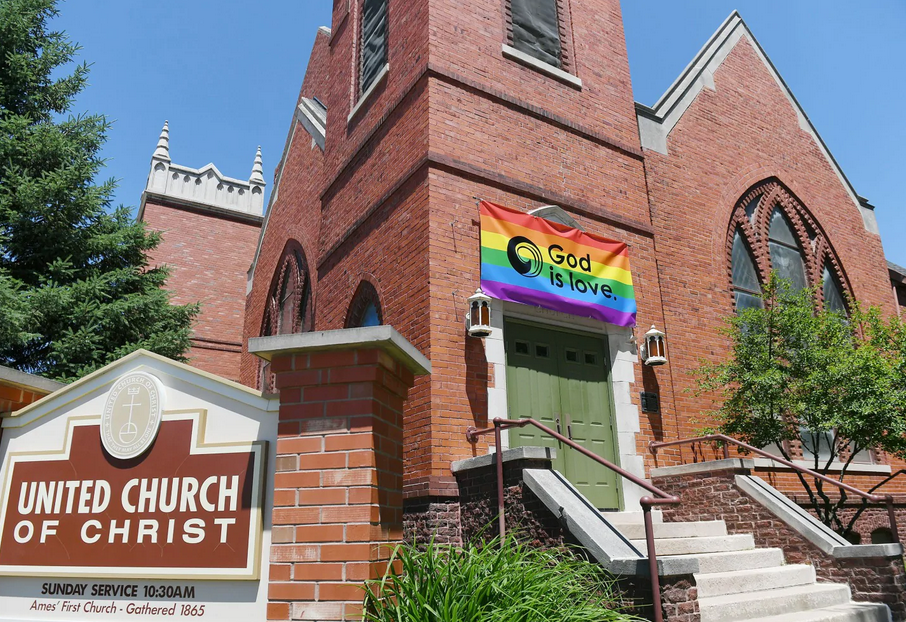 Below are links to news reports last week regarding the offense, arrest, trial, conviction (by jury) and sentencing of Adolfo Martinez. Judge Steven Van Marel sentenced Martinez to 15+ years in prison for reaching up, tearing down and then burning outdoors a $125 to $200 gay pride banner pictured.  He admitted to doing it apparently out of  personal, cultural or religious conviction about homosexuality. Accordingly he was found guilty of a hate crime. The sentence was largely what was advocated by the Story County Attorney office.

Please read the linked articles then ponder the implications, our points and other commentary about the matter.

He burned a church’s LGBTQ flag and got 16 years. They responded by advocating for him.

By inference of the dominant media treatment of the matter, tearing down a gay-pride banner is a direct assault against gay people and that is all you need to know.  The act was so hugely intimidating even though no gay people were involved, or injured, or probably even witnessed the incident, maybe never even owned the banner! (Gadzooks did I just commit a hate crime by referring to a gay rights symbol in a pejorative way?)

One more time. A sixteen-year prison sentence for ripping a cheap banner down and taking it to a parking lot across the street and burning it, seriously endangering no one.  Let that sink in. Now it was a stupid antic by someone who on video seems mentally off-balance, or perhaps under the influence, but clearly wasn’t much concerned about getting caught or getting away with something.

We are told the vandal, Adolfo Martinez, had priors including a felony or two (not recounted in specific number or severity in the reports we read). However the persecution and draconian sentencing supposedly had something to do with his rap sheet and  “three (felony) strikes” sentencing guide lines and allowances. Does anyone else wonder how many multiple offenders never get such treatment?

We also wonder why the property theft and destruction was classified a felony in the first place when the banner or flag, which appears to be maybe 5’X8′ is readily available at a cost of from $125 to $175 at “Rainbow Depot.” . Throw in maybe a few bucks for the printing overlay and we see maybe an offense of simple misdemeanor theft or at most a serious misdemeanor theft, the latter punishable by up to a year in jail and a scheduled fine. But oh no, Mr Martinez thinks ill of the gay lifestyle which that banner arguably represents. 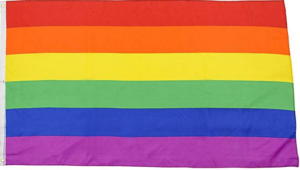 Desecrating it is a hate crime

So what about that? We thought hate crime laws were designed to punish direct crimes against persons not theft of objects that are easily replaceable, of no inherent consequence or value, do not deprive anyone of the ability to make a living. If attacks on symbols are a felonious crime regardless of the cost of the item then protestors who desecrate the American flag in this country should be charged with felonies – except that desecrating the American flag has been ruled protected speech. 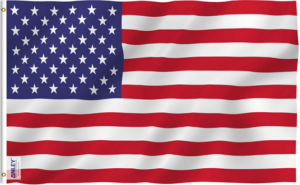 Desecrating it is protected speech

So now in Story County Iowa we have a gay rights banner, a symbol,  having more protection than the American flag, a symbol of nothing?! The desecration of that is something no one can take actionable offense at?

Mr. Martinez was also charged with some specie of arson.  SERIOUSLY – ARSON! He lit a banner on fire in a parking lot! A burning without a permit citation maybe, but ARSON?!  Back to the people who desecrate the US flag — are they not hate criminals, and if they burn it, now arsonists as well by the lights of Steven Van Marel, “The Law East of the Skunk River.”?

The persecutor on the case who various journals identify as the Assistant County Attorney Jessica Reynolds, is actually THE County Attorney  as the Story County Board of Supervisors appointed her to the position in 2016 rather than hold an election after the position was vacated due to the retirement of the elected County Attorney. At this writing we also now see that, effective February 7th, Attorney Reynolds has resigned to take a job with the Iowa Attorney General’s office held by vacant liberal Democrat Tom Miller, and get this, as training coordinator for County Attorney’s in Iowa.  By the way state prosecutors are one of the special projects of the George Soros machine to undermine the Constitution.

There maybe was a time when the ACLU would have jumped on the charges against Martinez, the verdict and sentencing inflicted on him as a desecration of the Constitution and right reason. But probably conservative legal outfits will need to go it alone because for the left, disrespect of the US flag is speech, even honorable speech, but disrespect of the rainbow flag “Gay Glory” is a hate crime. If Anton Scalia could accept that flag burning was protected speech then you would think the ACLU would see that hating a rainbow flag is also protected speech and not deserving of special aggravated treatment in prosecutions and sentencing.  But we doubt it.  We actually see a difference between the rainbow flag and desecration of Old Glory but we will hold that discussion for another day.

We are curious what Attorney Reynolds and Judge Van Marle would do about a malcontent purchasing a rainbow flag himself (herself) and then parading in front of that church or some other identifiable leftist political venue, perhaps on the public sidewalk, no, better, in rather risque fashion on the street without a permit outside such venue, and then lit said emotionally loaded property and waved it around in protest?

Now there might rightly be a minor charge or two possible (not in our book) but by Reynolds’ and Van Marel’s lights such a horrible person should be looking at ARSON charges along with obstructing traffic (however minimally as it is just one person but remember the good liberals are trying to send a message), maybe incitement to riot, littering perhaps?

But ADD to or amplify all such charges if the malcontent has ever evidenced the temerity to say something equivalent to “hate” for the gay lifestyle or special rights for gays, the charge enhancement HATE CRIME. They would probably do that out of the feeling that more messaging is needed (that is what this is all about – put all those deplorables on notice, NOT individual justice). If said malcontent has any criminal record, really throw the book at them as such a thought criminal needs to be put away. Indeed, make room in prison by accelerating the release of offenders one can have more  sympathy for, hit and run perps, domestic abusers,  (having handed them lesser sentences to begin with).

Speaking of which — as is pointed out by way of some of the conservative links regarding this story, serious bodily injury crimes are frequently met with lesser penalties in Iowa. We noticed some in the court reporting blotters mentioning Reynolds and Van Marel (web-search their full names, dig deep and you will find some). We have no idea how they would explain their double standards. For example regarding assaulting a police officer – four days in jail.  Frankly we are not questioning leniency in individual cases, we are challenging extremely harsh political sentencing to send a message.

As regards comparing treatment of vandals of  icons associated with the left with those icons associated with conservatism, all too many examples emerge when one looks at charges and punishments meted out for damage to pro-life displays. Of the hundreds of instances  over the years how many of the perps apprehended have the book thrown at them as has Adolfo Martinez?  Of those in Iowa, how many have been treated as hate crimes rather than simple vandalism?

Short of evidence of a pattern by a person or group, we believe that restitution, jail and fines as ordinarily appropriate, and any civil recourse are enough for any single incidence.  And government should not be the thought police and get into the business of picking which “hate” to be afforded enhanced punishment.

One more thing — why did none of the media stories we viewed regarding this matter  not mention the name of the judge involved?  Strangely, even conservative outlets did not.

Could it be because liberal outlets realize state judges sit for retention. While such retention votes in Iowa are typically free rides it is because people do not know the records of the judges unless something sensational happens. Iowa threw out a couple of state Supreme Court justices ten years ago hot on their vote after their constitutionally imaginative gay marriage decision.

The charges and sentence for Martinez are so out of kilter that one wonders — is this judge trying to politically martyr himself or is he relying on typical retention vote indifference, or maybe he is retiring. He was just retained by the typical wide margin for judges in 2016 and has four years left before the next retention vote for his position.  If he intends to stay he probably figures that he can rely on get-out-the-vote efforts by the usual suspects in campus town to save him.  By the way, he was first appointed in 1987 by Republican Terry Branstad.

At RedState: Man Sentenced to 17 Years in Prison for Burning a Gay Pride Flag   You will be made to care

Reason: A 15-Year Sentence for Burning a Stolen Gay Pride Flag Is Not Justice
Hate crime enhancements meet three-strikes laws, and the consequences are terrible.

This article at American Greatness is an example of the lesson conservatives should not take from the Martinez sentencing – roll over, be overly careful of creating dissidence in favor of separatism.

Overzealous prosecution refers to someone instituting legal proceedings against a defendant for criminal behavior with the intention to support an excessive enthusiasm for some cause,rather than with any genuine basics for the suit. Prosecution is the act of commencing and carrying out or pursing a lawsuit or criminal trial.