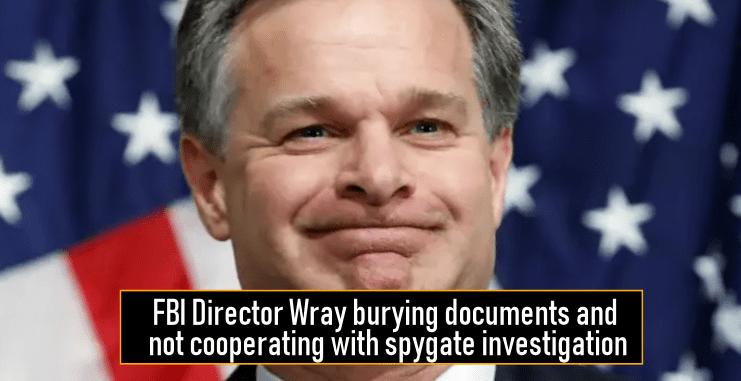 The Justice Department has claimed the (Flynn-Russia) investigation was unwarranted.

FBI Director Christopher Wray on Friday ordered an internal investigation into the bureau’s handling of the Michael Flynn case, just two weeks after the Justice Department declared that it was dropping the case against him and that federal investigators had no standing to interview the general in early 2017.

Wray “today ordered the Bureau’s Inspection Division to conduct an after-action review of the Michael Flynn investigation,” the FBI announced on Friday.

IS EVERYBODY MISSING THE POINT OF THIS?

Sara Carter: “Wray’s Friday announcement, is in my opinion, a ruse to get lawmakers off his back.”

We believe that FBI  Director Wray has ordered this “investigation” at this late date (why didn’t he do such an investigation following the IG report which was so critical of the Bureau’s handling, and, when GOP congressmen were trying to get information on the subject?), for no other reason that to support Judge Sullivan’s effort to ‘get FLYNN”.

The results of Wray’s “investigation”, we believe, will amount to a ‘friend of the court’s’ declaration that the DOJ’s request to dismiss the Flynn case was unwarranted and the FBI’s handling of it may have been ” a bit clumsy’, but entirely proper and legitimate.

So…Judge Sullivan, the FBI’s “investigation” proves you are right to ignore the DOJ and act as the ‘prosecutor’ and charge him with perjury, contempt, and maybe even “treason”.

We’ll apologize…again…for reminding readers that we may well have been the first to assess Christopher Wray as a “Deep State Fraud”!

We’ll go out on a limb again…and suggest that “Good Old Chris Wray” Is At It Again…Still Attempting to Cover The “Deep State’s” and the FBI’s Asses !

Admittedly, we could be accused of making our early assessment of Wray on the thinnest of evidence…the fact that all but 5 Democrat senators voted against his confirmation as Director of the FBI.

But it wasn’t that much of a stretch, actually, when one considers that:

a) few other Trump nominees received such great Democrat support (even Jeff Sessions was confirmed 52-47 with only one Dem in favor…Joe Manchin;

c) In a May 30, 2013 …it was revealed that Wray was one of the senior Justice Dept officials that nearly resigned in 2004, alongside then FBI Director Robert Mueller and Deputy Attorney General James Comey, due to illegal surveillance techniques the Bush administration had put in place under the Terrorist Surveillance Program.

d) Wray’s Senate confirmation hearing commenced on July 12, 2017.[26] Among other testimony, when asked if he believed that the investigation into Russian 2016 election interference and possible links to Trump’s campaign is a “witch hunt,” he stated that he did not.

e) In 2019, Wray was interviewed by ABC News.  In the interview, when asked about characterizations of the FBI and its agents as the “deep state”, Wray responded: “I think that’s the kind of label that’s a disservice to the men and women who work at the FBI who I think tackle their jobs with professionalism, with rigor, with objectivity, with courage.

f) He said he did not believe the Trump campaign was unfairly targeted by the FBI probe.

Recently, the ‘right of center’ PowerLine blog noted: “FBI Director Christopher Wray has been a severe disappointment. He has shown no inclination to reform that troubled agency, and seems to have, if anything, abetted the longstanding coverup of FBI misdeeds. Today he belatedly announced that the FBI is launching an investigation into its conduct in the Flynn case…”

Sara Carter has written following Wray’s announcement of an “investigation:

Wray’s Friday announcement, is in my opinion, a ruse to get lawmakers off his back.How can we trust that Wray’s internal investigation will expose what actually happened in the case of Flynn, or any of the other Trump campaign officials that were targeted by the former Obama administration’s intelligence and law enforcement apparatus.

The FBI defended itself in its Friday announcement saying that in addition to its own internal review, it has already cooperated with other inquiries assigned by Attorney General William Barr. But still Wray has not approved subpoena’s for employees and others that lawmakers want to interview behind closed doors in Congress.

The recent documented discoveries by the Department of Justice make it all the more imperative that an outside review of the FBI’s handling of Flynn’s case is required. Those documents, which shed light on the actions by the bureau against Flynn, led to the DOJ’s decision to drop all charges against him. It was, after all, DOJ Attorney Jeffery Jensen who discovered the FBI documents regarding Flynn that have aided his defense attorney Sidney Powell in getting the truth out to the American people.

From the Washington Examiner (continued):

Fox News reported on Friday that the bureau will seek to identify whether any current FBI officials “engaged in misconduct” during the investigation, as well as whether or not the agency can improve its investigation process moving forward.

The bureau “does not have the ability to take any disciplinary action” against former employees, the FBI’s statement said.

Flynn’s plight has received new attention in recent weeks, starting with the stunning Justice Department announcement at the beginning of the month.

Following the department’s decision, the judge overseeing the Flynn case, Emmet Sullivan, declined to immediately dismiss it per the recommendation from Justice, instead inviting an amicus curiae brief from retired Judge John Gleeson in support of continuing the case against the general.

Flynn’s team this week filed an appeal requesting the dismissal of Sullivan and the barring of Gleeson’s brief from the proceeding. A federal appeals court on Thursday agreed to hear Flynn’s case against Sullivan, and also, in a rare directive, gave Sullivan an 11-day deadline to explain his handling of the ongoing trial.