Generals who want to bypass Congress’ checks and balance role

SOME MIGHT INTERPRET “MAD DOG’S” OP-ED AS BEGINNING A CALL FOR A ‘MILITARY JUNTA’!

We wondered what the left meant by that term. What is it, specifically, “Charlamagne ‘Tha god'”, and those ice cream vendors, Ben and Jerry, want to “break up, destroy, demolish, undo, wreck, etc”! 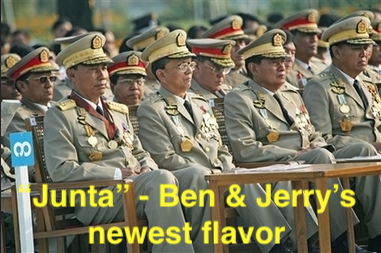 We were already aware that, in large part, they meant…” tear down the American system of government, economy, and society in general.”

It has been obvious for a long time, that the left… the political left, the religious left, the ‘social’ left…wanted to literally, burn down our capitalist system. They’ve wanted to ‘demolish’ the Constitution…too restrictive, as Obama observed, as far as what government can do in ruling the lives of its citizens!

It is now apparent what some of the specifics of how the left intends to “permanently transform” the USA.

1) “Eliminate police departments! “Defund the police” cries are being heard around the nation, in cities dominated by the Democratic Party . Minneapolis, Los Angeles are among cities in which officials (Democrats) are going forward with legislation to drastically cut funds for or eliminate entirely their police departments.

2) Military generals, active and retired as well as at least one Cabinet official are publicly criticizing President Trump’s possible use of active military in the event that the civil unrest worsens and certain city governments are unable or unwilling to assure their citizens’ safety.

More importantly, former Secretary of Defense and retired Marine general, James ‘Mad Dog’ Mattis and current Chairman of the Joint Chiefs of Staff, Army General Mark Milley seem to be urging active military personnel to potentially defy orders from the their Commander-in-Chief, the President of the United states, citing, of course, their own ‘respect’ for the Constitution.

But, in our opinion, that doesn’t make them immune from leftist media flattery nor does it make them political geniuses or Constitutional experts. Whether attempting to urge creation of a “military Junta” or not, the op-ed by Mattis and the letter to military leaders by Milley suggests a very dangerous path they seem moved to embark upon.

At any rate, regardless of the intent of these gentlemen, a military overthrow of the US government would not be met with disappointment by many on the left.

Instead, we suggest, that it would be one manifestation of their desire to “dismantle” the “white privilege structure” they now cite as the root of all problems in America..

And their support of “defunding” or eliminating police departments is only a page out of the radical communist revolutionary’s playbook.

And, don’t think the left doesn’t have their own ideas of “police reform” and on what would replace “police departments”. Every authoritarian regime has had its version of “police reform” and they have not necessarily called their oppressive, repressive arms of government “police” but their function was to go way beyond the police authority of a free society such as America has been since its founding.

To those mis-informed, ill-educated young people …be very careful what you wish for; there are some very evil people very willing to give it to you.        dlh