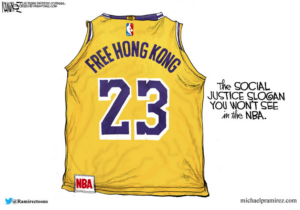 EVEN IF THEY ALL WEAR ‘BLM NIKES’?, WE ARE NOT WATCHING

TUNING OUT THE NBA
The NBA resumes its season tonight. Some players will be wearing BLM-related “social justice” slogans on their shirts, where their names normally appear. In addition, “Black Lives Matter” is printed on all three courts where games will be played.

On top of that, some broadcasters will likely offer their views on race in America. This article in the Washington Post strongly suggests that one or more of the Washington Wizards’ broadcast team will do so.

Chris Miller, who is featured on Wizards’ broadcast, told the Post:

I don’t want to say myself into the story, but I am a Black man, so this stuff is actually really affecting me. I’m a different person than I was on March 10, the last Wizards game. What happened to George Floyd broke me. I can’t watch another Black man be murdered on TV. So that’s where I’ve kind of changed. I’m more apt to have those conversations rather than talk about if Bradley Beal should make all-NBA.

Miller appears not to have said how he feels about Blacks, including children, being murdered regularly on the streets of Washington, D.C. by criminals. I doubt that this phenomenon — widespread, unlike unjustified police killings — will feature in his televised “conversations.”

But I won’t find out. I’ve watched NBA games on television since my introduction to the league in the 1957 Finals (St. Louis Hawks vs. Boston Celtics), but I won’t be watching any more games this season. I see enough one-sided, superficial BLM-related discussion in connection with my “day job” without being subjected to such propaganda while watching sports.