If Biden Prevails, ‘President Harris’ Will Owe it All to William Barr

“…that dirty little coward
That shot Mr. Howard
Has laid (poor) Jesse in his grave”  *

If Biden Prevails, ‘President Harris’ Will Owe it All to William Barr 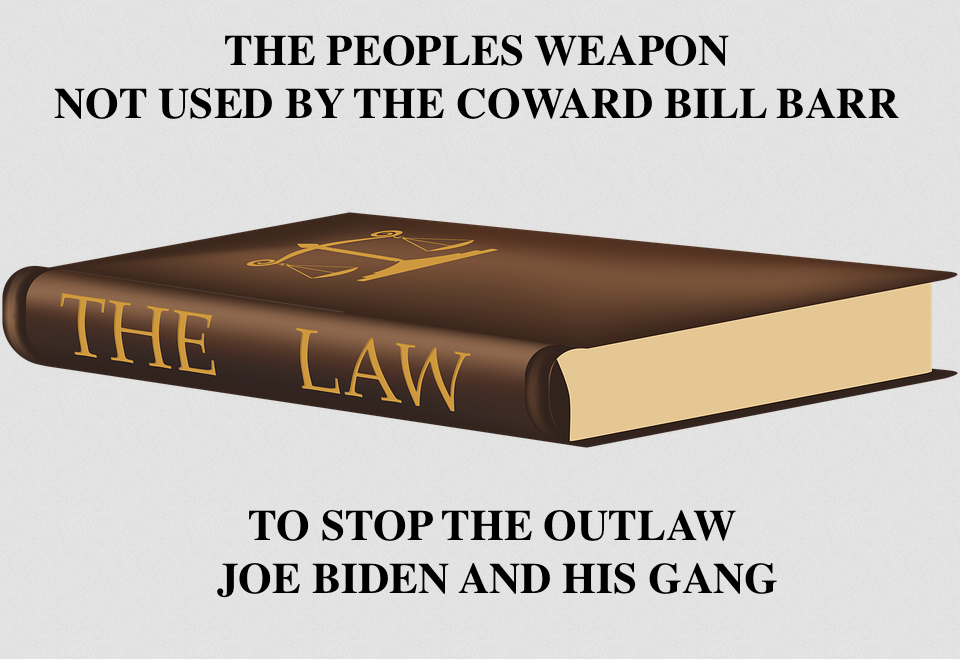 From courageous testimony before Congress and a captivating TV interview with Mark Levin, to a deafening silence on the scandal that wrongly damaged a consequential presidency, William Barr transformed himself from an ‘Icon of the Rule of Law’ to a caricature of a cowardly backstabber.

* Bob Ford was a close ‘friend’ of “J.D.Howard”…a ‘close friend’ until he shot “Mr. Howard” in the back to collect some reward money…he thus became memorialized in the “Ballad of Jesse James”, and widely known as “the dirty little coward who shot Mr. Howard and (has) laid poor Jesse in his grave”.

Now, there are some who would be happy to liken William Barr to ‘Bob’ Ford as an opportunity to characterize President Donald Trump as Jesse James.

In our view, however, it is neither necessary, nor fair, to portray Mr. Trump as a villainous fugitive bank-robber in order to accurately depict Attorney General Barr as a “backstabbing ‘once trusted’ subordinate”.

President Trump named Barr to the vital federal government position of Attorney General, succeeding the inept Jeff Sessions, because of his widely acclaimed reputation for integrity and commitment to justice and to the ‘rule of law’.

Upon accepting the position, it was Barr himself who declared that his first objective was to get to the bottom of the so-called “Russia Collusion Hoax” which had severely damaged the Trump presidency throughout its first 2 years. Barr told congress that major parts of the story told by members of the House and figures in the federal law enforcement apparatus during the Obama administration “didn’t hang together”. Barr suggested that there had been serious wrong-doing, possible corruption, and criminality involved and that he would doggedly pursue an investigation.

In public appearances, Mr. Barr was impressive and persuasive. If you were one who believed that people including CIA Director James Brennan, National Security head James Clapper, and the FBI’s James Comey, as well as key members of the Obama regime , including Vice President Joe Biden, and even Obama himself were corrupt and probably guilty of serious crimes, you were very reassured that Bill Barr, a former very successful and honored Attorney General would again, be the right guy for that job.

It was May, 2019, when Barr appointed another highly regarded figure, one widely recognized as a premier investigator… John Durham… to head the “Russia Investigation”.

And, right up until mid-summer, 2020, America was led to believe that the many very serious questions and issues involved with the “Russia Hoax” would be resolved…and justice would be done before the November, 2020, presidential election.

The rest, as they say, is history!

And not a history that America can be proud of !

After being asked by the press many times why there was but one report of possible wrongdoing associated with the Russia hoax by a minor player, and that from the DOJ Inspector General, not Barr, the Attorney General advised the American people he expected Durham’e probe to be concluded and a ‘report to America’ made “by the end of summer”.

As most people know, the ‘end of summer’ came and went…and no announcement by the Justice department.

In our view, William Barr not only failed to live up to his “impeccable” reputation and vaunted credentials, but has actually been a disgrace.

The Dept. Of Justice and the FBI are now an embarrassment to the world.

William Barr has not only set aside his alleged “high regard” for law and justice ; he has demonstrated a cowardice perhaps unrivaled in American political history.

Barr feared that he would be accused of “politicizing” his authority if he revealed to the American people that his investigation had found evidence of serious corruption on the part of a nominee for the presidency in a coming national election.

And thus, a candidate, under a “dark” cloud of suspicion, based upon mountains of evidence revealed by reliably objective, competent journalists was allowed to stand before the American voters for election to the highest office of the land. Solid evidence strongly suggested that crimes of the most serious nature were committed by former Vice President, Joe Biden and other key figures in the Obama administration, and they were aimed at undoing a valid election, undermining a duly elected presidency, overthrowing the government of the USA, and enriching themselves at the expense of the nation’s security.

But Mr. Barr opted to keep under wraps whatever findings and conclusions his “investigation” may have reached regarding any substance to those allegations and to allow the possibility that an apparently guilty individual could be elected to the presidency and thus be ‘out of reach’ of promptly, or even eventual, applied justice.

Or…to give Mr. Biden full benefit of the doubt… perhaps the “investigation” found no evidence of wrongdoing on anyone’s part, and thus Barr could have allayed the threat to the American people’s confidence in its justice system !

Mr. Barr certainly owed the American people, and the previous administration, that revelation as well.

Mr. Barr not only refused to reveal any findings of his ‘investigation” but, in the months since his confirmation, also allowed a completely unfounded impeachment to proceed and the presidential election involving candidates who were allegedly deeply involved in the scandalous activity of a previous administration, to occur.

Voters went to the polls this week, having a choice between President Trump and a candidate clearly, for a variety of reasons, uniquely unsuited for any responsible government position. Widely accepted as well, is the belief that Joe Biden, for reasons well publicized, if elected, is not likely to serve more than a fraction of his term as president and will be replaced by his potential Vice President, Kamala Harris…a person whose own Party rejected, out of hand, her presidential candidacy

However this election turns out, it is our opinion that William Barr exhibited an extraordinary dereliction of duty out of fear of criticism from a morally bankrupt political party.

How the hell does one go from investigating to determine if one presidential administration’s actions sought to overturn its successor’s election… to keeping silent on its findings and stands by to allow a member of the former, allegedly guilty administration, to be elected to head a succeeding administration?            dlh

2 Responses to If Biden Prevails, ‘President Harris’ Will Owe it All to William Barr