Excerpts from the new Book of Ezekiel… revised Biden edition 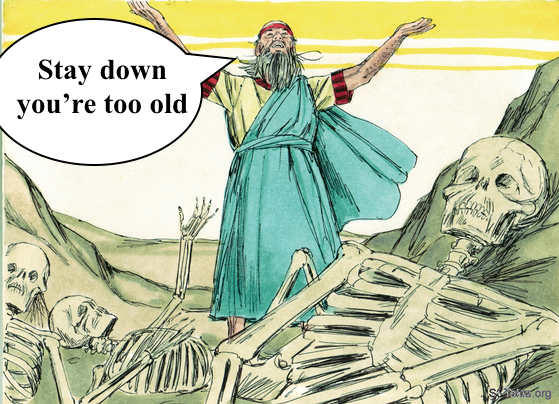 “But here is a simple truth that many of us seem to resist: living too long is also a loss. It renders many of us, if not disabled, then faltering and declining, a state that may not be worse than death but is nonetheless deprived. It robs us of our creativity and ability to contribute to work, society, the world. It transforms how people experience us, relate to us, and, most important, remember us. We are no longer remembered as vibrant and engaged but as feeble, ineffectual, even pathetic.”

As you read this, consider this:

In the lenghthy Atlantic essay, Ezekiel Emmanuel lays out, in detail, his beliefs regarding aging in America, to what extent, lifesaving medical procedures for people above a certain age should be employed, and suggests how his ideas might be incorporated into public health care policy. You are welcome to your own beliefs on these topics but what one should deeply reflect on is the fact that this is the man who will now exert major influence on potential President Joe Biden and his equally potential Vice President, Kamala Harris, on American healthcare policy (much as he did the former President Obama on Obamacare).

MOST AMERICANS HAVE heard of Ezekiel Emmanuel, Rahm’s brother, and a close advisor to Obama on Obamacare.

He is now a close advisor to Biden on the COVID ‘task force’.

“At 75 and beyond, I will need a good reason to even visit the doctor and take any medical test or treatment, no matter how routine and painless. And that good reason is not “It will prolong your life.” I will stop getting any regular preventive tests, screenings, or interventions. I will accept only palliative—not curative—treatments if I am suffering pain or other disability.” (My note: I wonder if discussed his views with Ruthie Ginsburg. As you read more, imagine yourself as Justice Ruthie)

Excerpts from Atlantic article:    Why I hope to die at 75

“But here is a simple truth that many of us seem to resist: living too long is also a loss. It renders many of us, if not disabled, then faltering and declining, a state that may not be worse than death but is nonetheless deprived. It robs us of our creativity and ability to contribute to work, society, the world. ” (As you know, Biden is 77, 78 on inauguration day…if he has one)

-“I am talking about how long I want to live and the kind and amount of health care I will consent to after 75. Americans seem to be obsessed with exercising, doing mental puzzles, consuming various juice and protein concoctions, sticking to strict diets, and popping vitamins and supplements, all in a valiant effort to cheat death and prolong life as long as possible. This has become so pervasive that it now defines a cultural type: what I call the American immortal.”

-“Since 1960, however, increases in longevity have been achieved mainly by extending the lives of people over 60. Rather than saving more young people, we are stretching out old age.”

-“Compression of morbidity…. It tells us exactly what we want to believe: that we will live longer lives and then abruptly die with hardly any aches, pains, or physical deterioration. It promises a kind of fountain of youth until the ever-receding time of death. It is this dream—or fantasy—that drives the American immortal and has fueled interest and investment in regenerative medicine and replacement organs.”

-“My father illustrates the situation well. About a decade ago, just shy of his 77th birthday, he began having pain in his abdomen. Like every good doctor, he kept denying that it was anything important. But after three weeks with no improvement, he was persuaded to see his physician. He had in fact had a heart attack, which led to a cardiac catheterization and ultimately a bypass. Since then, he has not been the same. Once the prototype of a hyperactive Emanuel, suddenly his walking, his talking, his humor got slower. Today he can swim, read the newspaper, needle his kids on the phone, and still live with my mother in their own house. But everything seems sluggish. Although he didn’t die from the heart attack, no one would say he is living a vibrant life. When he discussed it with me, my father said, “I have slowed down tremendously. That is a fact. I no longer make rounds at the hospital or teach.” Despite this, he also said he was happy.”

-“As Crimmins puts it, over the past 50 years, health care hasn’t slowed the aging process so much as it has slowed the dying process. And, as my father demonstrates, the contemporary dying process has been elongated.”

-“So American immortals may live longer than their parents, but they are likely to be more incapacitated. Does that sound very desirable? Not to me.”

-“Mentorship is hugely important. But it also illuminates a key issue with aging: the constricting of our ambitions and expectations.

Unless there has been terrible abuse, no child wants his or her parents to die. It is a huge loss at any age. It creates a tremendous, unfillable hole. But parents also cast a big shadow for most children. Whether estranged, disengaged, or deeply loving, they set expectations, render judgments, impose their opinions, interfere, and are generally a looming presence for even adult children. This can be wonderful. It can be annoying. It can be destructive. But it is inescapable as long as the parent is alive.”

-“When parents routinely live to 95, children must caretake into their own retirement. That doesn’t leave them much time on their own—and it is all old age. When parents live to 75, children have had the joys of a rich relationship with their parents, but also have enough time for their own lives, out of their parents’ shadows.”

-“My view does have important practical implications. One is personal and two involve policy. “
To me, this is the ‘clincher’. His beliefs are his own…and he is welcome to them. But, recall, this guy now has (as he did with Obama) tremendous impact on national health care policy:
-“Once I have lived to 75, my approach to my health care will completely change. I won’t actively end my life. But I won’t try to prolong it, either.

This means colonoscopies and other cancer-screening tests are out—and before 75. If I were diagnosed with cancer now, at 57, I would probably be treated, unless the prognosis was very poor. But 65 will be my last colonoscopy. No screening for prostate cancer at any age. (When a urologist gave me a PSA test even after I said I wasn’t interested and called me with the results, I hung up before he could tell me. He ordered the test for himself, I told him, not for me.) After 75, if I develop cancer, I will refuse treatment. Similarly, no cardiac stress test. No pacemaker and certainly no implantable defibrillator. No heart-valve replacement or bypass surgery. If I develop emphysema or some similar disease that involves frequent exacerbations that would, normally, land me in the hospital, I will accept treatment to ameliorate the discomfort caused by the feeling of suffocation, but will refuse to be hauled off.

-“What about simple stuff? Flu shots are out. Certainly if there were to be a flu pandemic, a younger person who has yet to live a complete life ought to get the vaccine or any antiviral drugs. A big challenge is antibiotics for pneumonia or skin and urinary infections. Antibiotics are cheap and largely effective in curing infections. It is really hard for us to say no. Indeed, even people who are sure they don’t want life-extending treatments find it hard to refuse antibiotics. But, as Osler reminds us, unlike the decays associated with chronic conditions, death from these infections is quick and relatively painless. So, no to antibiotics.

-“Obviously, a do-not-resuscitate order and a complete advance directive indicating no ventilators, dialysis, surgery, antibiotics, or any other medication—nothing except palliative care even if I am conscious but not mentally competent—have been written and recorded. In short, no life-sustaining interventions. I will die when whatever comes first takes me.”