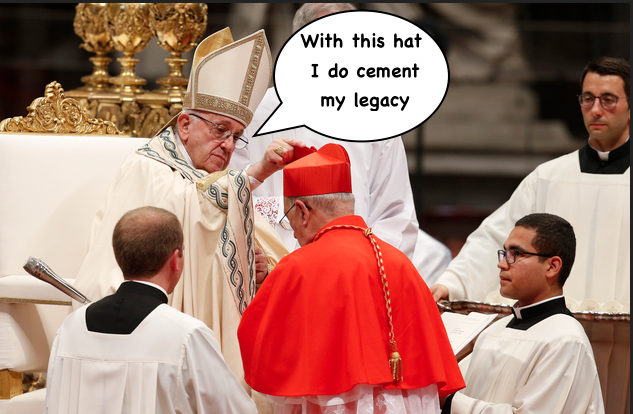 As the Democrat-dominated (if it so becomes) U.S. Senate has promised, Francis has “packed the (Vatican) “Court” which will elect the next Pope:

“With Saturday’s new cardinals, Francis has named 73 of the 128 voting-age cardinals, compared with 39 named by Pope Benedict XVI and 16 by St. John Paul II. While the outcome of a future conclave can never be predicted, it’s not a stretch to suggest that a hefty majority of today’s electors presumably share the pastoral and doctrinal attitudes of the pope who named them.” (Fox News, 11/28))

That’s right! Francis presumes that the Cardinals he has chosen to elevate to their lofty posts share the anti-capitalism, anti-America, anti-‘climate change’ enthusiasm, and radical “social justice” ideas he has, and does not attempt to conceal. He assumes they will thus elect a like-minded successor to his Papacy.

Upon his election as leader of 2 billion Catholics world-wide, Pope Francis (Mario Bergoglio of Argentina) billed himself as an extraordinarily “humble” man.

As “Il Papa”, he has proven to be anything but…he proudly proclaims, globally, his anti-capitalist, pro-Marxist beliefs, and constantly interjects himself into the affairs of sovereign nations, especially the United States…as in inviting the NBA players to the Vatican in order to “learn about the “Black lives Matter” movement and the players’ techniques for promoting “social justice” aims.

Francis is very keen, also, about his relations with Communist China, having just renewed an ‘agreement’ with Xi JinPing, to ‘share the authority’ for naming Catholic Bishops in that country ( Catholic Bishops are thus ‘acceptable’ to the Chinese Communist Party; to our knowledge, the Pope does not share that responsibility with any other nation or ideology).