FIVE PEOPLE DIED AT THE DIRECTION OF DONALD TRUMP WHILE MOB HE INSTIGATED SACKED CAPITOL!!!!!

Here are some of the articles from ten days or so ago, the theme of which continues today in left dominated press outlets and Mitch McConnell’s pearl-clutching imagination. It has been upped to five after a policeman died we are told by NBC News (2nd to last screen shot) from injuries sustained on duty during altercations inside the Capitol. It could turn out that his death is of the nature of so many COVID deaths, related but more complicated than the sensational assignation, just as two of the sensationalized death numberings were protestors, of age and compromised heath, merely part of the massive crowd. It was an emotional time for them but they were there for a political rally/protest, they were not part of any “Capitol incursion”.

To gin up the death count with these essentially coincidental deaths is calumny. You get several hundred thousand people together  and over the course of the many hours they were there, there will likely be a couple of deaths from natural causes. There were deaths in that time period of DC residents in there homes or hospital.  Should they be attributed to Donald Trump?  The media is even attributing a cop’s contemporaneous suicide to the “Trump rioting” 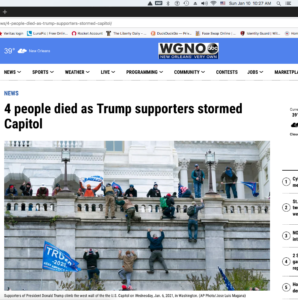 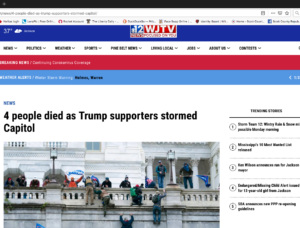 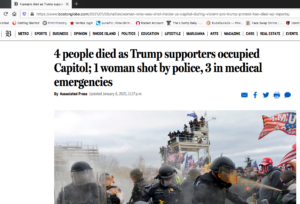 Such distortion and lies pretty much continues to be the gist of the media reports of the protest (including some conservative media). Such reports supposedly motivates spontaneous outrage toward the President and have elicited (sounds like illicited)   impeachment charges against him. Even many pathetic or cowardly pearl clutching elected Republicans and the now out of the closet apparat have gotten in on the act.

Any honest person who heard or read the Presidents comments on January 6th knows that he exhorted no such thing, indeed just the opposite. The so-called rioting was in no way endemic to the crowd, a couple hundred out of hundreds of thousands, possibly mostly made up of leftist provocateurs, but whoever did it, it was mild compared to the leftist instigated destruction injuries and death during the entire four years of the Trump administration. We are not saying there were not police injured, the result of pushing shoving and possibly directly inflicted on them, but we believe the greatest extent was done by fifth columnists, BLM ANTIFA infiltrators.

The truth is the only death directly attributable to the “riot” “insurrection” was of an unarmed female of no threat who may have been indiscriminately shot by a cop.  By the standard of the left there should be “spontaneous”  rioting , burning, and looting and assaults on police officers across the country by us righties. There won’t be.

Other links of note regarding expected heart attacks in the course of a day: