Explains a lot: Bush family legacy IS the swamp 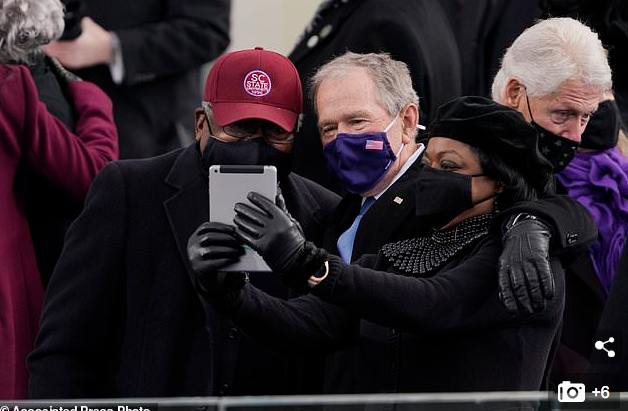 Masks — Ironically they were wearing them long before COVD

Maybe some national columnist will look into this

Clyburn revealed on a call to reporters that Bush told him: ‘You know, you’re the savior’ and said only Biden could have beaten Trump”
………….

Bush, who has largely stayed out of politics since leaving the White House, chose ‘none of the above’ in the 2016 presidential election but has not revealed how he voted in 2020.

In a statement issued following Biden’s victory, he wrote, ‘Though we have political differences, I know Joe Biden to be a good man’ and added, ‘I offered him the same thing I offered Presidents Trump and Obama: my prayers for his success, and my pledge to help in any way I can.’

‘Let’s not make this into more than it is,’ he wrote on Twitter, adding that the former president was ‘saying Clyburn helped saved Biden´s nomination … nothing Biblical here.’

Bush had tried to stay out of politics since leaving office, but Trump privately called him a ‘dummy,’ and criticized him for the war in Iraq. Four years ago at inauguration, W. Bush commented ‘That was some weird s**t.’

The hostility was reciprocated: Members of the Bush family were critical of Trump throughout his administration, particularly his younger brother Jeb.

Clyburn’s pivotal endorsement before South Carolina´s Democratic primary seemed to have brought Biden´s candidacy back from the brink following lackluster performances in other early states. It was an awaited signal for many Black voters that Biden would be the candidate to stand up for their interests.

Our question has always been, ‘Why did Trump pick the people he did, who were among his closest advisors’?

Many, like Rex Tillerson, Jim Comey, ” Mad Dog” Mattis, DNI Dir., Dan Coats, and General John Kelly…each one of whom was eventually fired after a fairly public ‘falling out’ of some kind with the President. Then there were some that were not fired but who stepped aside willingly, like Rod Rosenstein, and still others who stayed around and have managed it seems to unobtrusively do damage to Trump…most notably in our view, Chris Wray, FBI Director, and Gina Haspel, CIA Dir. (recommended and supported by…JOHN BRENNAN!!!)

And, William Barr may be another, but a rather special case.

Our theory has always been that, being a ‘non-politician’, and one who had little intimate knowledge of Washington, nor the people who ‘run the place’ (or think they do) , Donald Trump by necessity, and probably by choice, relied on some of the ‘old hands’ he believed knew their way around and could be depended upon to give him advice on who was whom as he chose his key people.

And today’s story provides some insight into the ‘who’ and ‘why’ Trump surrounded himself with people he apparently thought he could trust but instead turned out to be the ‘swampiest’ of the swamp denizens of DC.

Mr. Trump’s administration was filled with “leakers”, administration policy opponents, and covert political enemies…most of whom came from the ranks of his own Party.

Was Trump just very bad at ‘sizing people up’, or in picking people he could trust?

No. We have believed that , being new to the Washington ‘game’, Trump went to the DC veterans to suggest the experienced government and political people he would need to govern.

And now, we believe there is an answer to why his choices have seemed so bad, so often.

Donald Trump had offended the powerful people in his own party with his rough style of political combat. He was regarded as an outsider. The old line ‘professional politicians’ resented a ‘business guy’ moving in on their ‘turf”. If a “non-politician'”could win an election and take over what they’ve owned exclusive ‘rights’ to for decades, if not from the nation’s founding, well. nothing was ‘for sure’.

And, right at the ‘top’ of the political ‘royalty’ were the Bushes, the Clintons, and the various “senior” politicians in Congress.

The Bushes were perhaps the most deeply resentful of Trump: a) he was ‘disrespectful’ in trouncing ‘JEB’, who was ‘in line for the Oval Office gig. He beat Hillary, another who was “in line’, and the wife of GW’s “brother from another mother”.

And how many “Bushies” initially gained key staff jobs in Trump’s administration? How many other Trump selections were based on recommendations from Bush loyalists.

There were many other key people who were not part of the Bush camp but shared their disdain for him. The FBI, for example. Probably as corrupt as any institution in Washington but not necessarily aligned with any Political “dynasty’. They’re in it for themselves; thus a “Comey”…he was a thorn in the side of the Bushes, the Clintons, and most certainly Trump. Other key FBI top people were products of the Obama years but shared with Comey their hate for Trump.

It all has many facets but now the Bush element of the attempted and ultimately successful overthrow of Trump is coming to light.

What about William Barr, for example? We believe the ‘kindly’ ‘Bill’ Barr, a Bush guy way back, may have, most likely we think, been in on the deal. Now that we know how deep the Bush hatred of Trump is, Barr’s role seems more likely, and more obvious. Who suggested to Trump that Barr was the guy for his Attorney General? Doubtful that Trump, himself, knew much about the former Bush AG.

And, is it really necessary to rehash what “good” Barr did for Trump?

A lot of Washington intrigue here, and we neither know the full extent nor have the time to cover it all now.

But the Bush glee, shared with Clyburn over Trump’s deposition, suggests there is a lot yet to be learned…but probably never will be, given the way events since November have unfolded.          dlh