Kasparov doesn’t get it 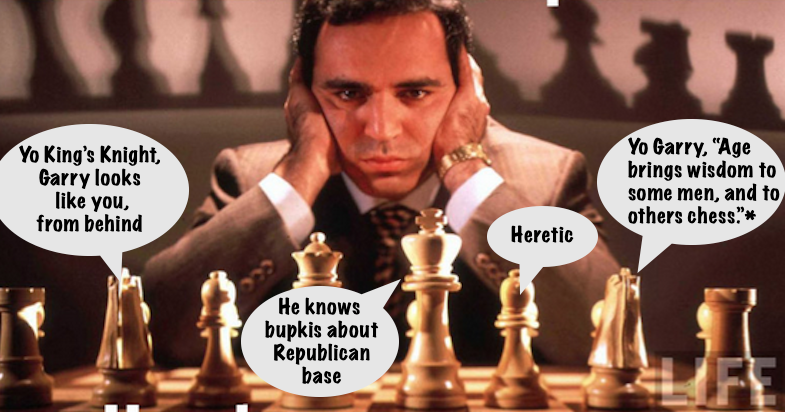 Maybe he spent too much time in the Soviet Union. As the big “expert”on “socialism, Garry Kasparov seems not to see the dishonesty in labeling the clear socialist/communist impulses and drivers of today’s Democratic Party as “moderate”.

In his Wall Street Journal op-ed Friday, Kasparov says that, a) “radicals” have ‘taken over the GOP (?!)’ and that apparently “tried’ to take over the Democratic Party but, b) “Joe Biden defeated them at the ballot box”!!!!

Oh, and “Mr. Trump lost and fairly so. There was no widespread election fraud, or it would have been presented in court.”

“There is no time for feeble “whataboutism.” Endorsing Trumpist lies and violence in the name of fighting leftist lies and violence is a road to ruin. The left has its share of radicals, but Joe Biden defeated them at the ballot box. They didn’t take over the Democratic Party, as they did the GOP. And you aren’t going to lecture me about the dangers of socialism when I’ve spent my life warning of its failures and terrors.” (Kasparov)

If reasonable Republicans want to hold off the far left, they will have to stop the rise of the far right.

“Accepting reality is the most important step back from the brink. Mr. Trump lost, and fairly so. There was no widespread election fraud, or it would have been presented in court. It is anything but patriotic to attack the integrity of U.S. elections and democracy with rumors, anecdotes and pseudostatistics.

“Over the chessboard, I’m a famously sore loser. But I learned that if you don’t accept that you lost, and understand why, you’ll keep on losing.
Trumpism came to Washington promising to burn everything down, and it came close. There is now a chance to build something new and better: a political center