Surprise! Unjustified accusations (roll tape  of Trump January 6 comments)) and making an appearance on virulently anti-Trump CNN and in particular rabidly anti-Trump Don Lemon’s show as some sort of Republican martyr gets you 4 minutes of fame along with your QCTimes story.  As Donald Trump would Tweet: SAD! 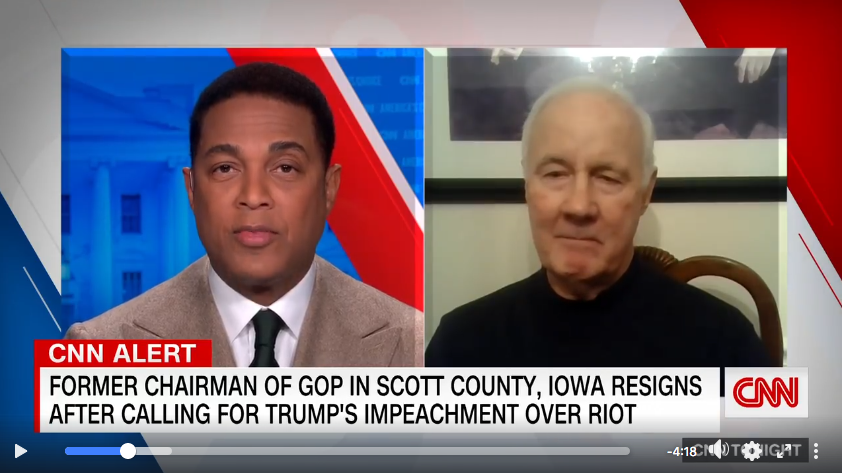 The subtitle fits the narrative of ~~principled~~ GOP Chairman who does the right thing. Probably intended to suggest he also resigned from the Party (he has not) otherwise why would they impart syntax of “former” with “resigns”. He had already resigned which made him former weeks ago. A more accurate titling consistent with the story would be ~~ “Chairman of Scott County GOP asked (told) to resign after calling for Trump’s Impeachment over riot” Prior to the Jan. 6th preponderantly peaceful assemblage, Millage had already let it be known he would not be running again as Chairman. So he gave up no power or influence and given the level of outrage would not likely have survived an “impeachment” vote aimed at him. (can we say “aimed”)

Readers will remember our report  back on January 8th the day the news broke that Millage had without evidence made an easily debunked accusation that President Donald Trump incited violence claiming his words  at the January 6th DC rally were an impeachable offense.

In viewing the video it seems at first blush that Millage did not  throw conservatism under the bus, but he did. He greatly hurt the party of conservatism locally, abetting calumnious charges of the left. His accusation and call for impeachment against Trump was not supportable by the facts, and politically it was incredibly hurtful locally, breeding contempt for the sincerity of the party apparat, and irresponsible as a party official to make such a baseless claim. Leaders let the smoke clear before they start shooting, the fire was not friendly.  Thanks to the reader who sent the link to the video.