Donald Trump issued a trenchant summation of Mitch McConnell as a “dour, sullen, unsmiling political hack,”.  More so it turns out he is a marginal constitutionalist (there was no “close call” as to the constitutionality of the impeachment of Trump after he left office nor of the charges of incitement, legally or morally as President.

Furthermore McConnell’s statement on the floor of the Senate was an egregious effort to convict Trump in the court of public opinion, to pull down a better leader who pursued moral and ethical  policies with more fervor than McConnell’s ilk would ever muster.

McConnell was not operating in love or to protect the Republican Party but rather in furtherance of the unity party, the swamp, the DC denizens the one that ratchets government control, enhances politicians at the expense of citizens, by compromising to oblivion with a truly despicable party and its intents.

McConnell was constrained by the Constitution but his performance ought not be characterized as a true or effective defense of it. McConnell’s  words indicating his belief (against any reason, only jealous swamp rage against Trump for not being of the political establishment McConnell is so enamored with) are those of someone bitterly disappointed that there was no practical way to get anything but a rump trial in the time frame the House provided. It would have been too embarrassing even for him in his swamp rage.

But even had it happened before Trump left office, in which McConnell by his words would have voted to convict (as it turns out don’t take a constitutional law of evidence class from this guy in his, we hope soon, retirement from the Senate). . .  and say Trump was convicted . . . the Senate and especially McConnell would not have ended Trump’s political support rather it would have “ignobled” the Senate.  And that would have made this more recent incredible communication from McConnell’s political action committee even more a pompous exercise of someone totally out of touch with the pulse of rank and file Republicans and their view of him..

Only Mitch McConnell could be so oblivious as to how most Republicans now likely view him and send out yet another email as set forth below.  We cannot imagine this guy raising much money from rank and file Republicans.  Maybe Trump was wrong, McConnell is also laughable, sadly so. 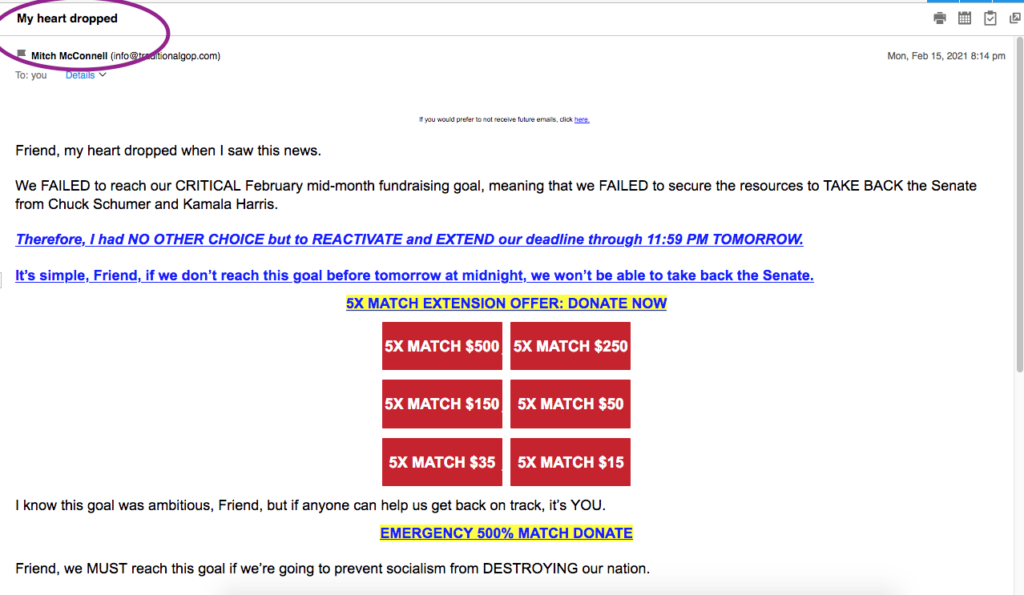