A day to remember real courage, “taking a knee”– not the Kaepernick clowns of the NFL

On Mount Suribachi during the battle of Iwo Jima, Marines “took a knee” to raise the American flag. Three of the Marines in the famous photo also took a Japanese bullet on the same island and died there.  Prior to the flag-raising, the Marines stood, they fought, they advanced, then they put their knees and backs into raising the flag for all it represented that day – freedom, sacrifice, courage, a rallying symbol. It was this day in history, 76 years ago . . . and reading the article linked below  we are reminded  what an ungrateful, ignorant a–hole Colin Kaepernick is . . . and that everyone who “admires” him desperately needs an education about “taking a knee”.

It’s February. The star-spangled kneelers of the NFL have given way to their imitators in the NBA, and soon some millionaire dugout squatters of baseball will be adding their insults to the flag they hate.

Today is February 23, an otherwise unremarkable day in history. The first Gutenberg Bible was printed, the first Salk polio vaccine shot administered, and Mississippi was allowed back in the Union. But nothing worth a holiday or a greeting card.

Unless you are ninety-five years old and thinking back to that day of your youth when you were on hunkered behind some ugly volcanic rock stained red by the blood of the buddy beside you and looked up at the unvegetated hill to see others of your comrades raising a flag barely visible in the smoke and haze. If you squinted, you might have seen a couple of guys with cameras up there with them.

It was February 23, 1945, and you were looking at the American flag being raised on the summit of Mount Suribachi, on a godforsaken island called Iwo Jima. One of those photographers, Joe Rosenthal, took a picture that would soon become the most iconic of the American flag’s long history. Papers would be running with that picture in a few days, and it stirred the pride and hopes of people back on the home front, still not knowing the ultimate cost of that island struggle. Even a preschool kid like me would be awed by that image on pages we could not yet read yet would never forget for the rest of our lives. 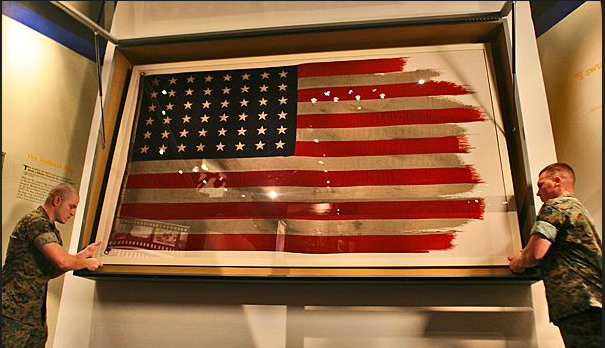 It was a presumptuous act, that flag-raising. The island was far from being secured; that would take several more weeks. It would cost 7,000 Marines their lives. Twenty-seven of them were awarded the Medal of Honor. Three of the six flag-raisers would leave the island with another American flag, the one that covered their bodies.

That flag still exists. Much tattered back then by the whipping winds of the Iwo summit, it can be seen at the Marine Corps Museum in Quantico, Virginia.
Flash forward to today. Thanks to our failed schools and our woke culture, few under forty even know of Iwo Jima, or that there was a world war. Of those 27 Medal of Honor awardees, 22 were reservists, called to duty for that struggle. Today, the FBI and the War (Defense) Department would be doing an investigation into their character, the newspaper they read, the church they went to, the girls they dated, the organizations they belonged to, and the political party they voted for. They would be called domestic terrorists. In 1945, we called them Americans.
Fleet Admiral Chester Nimitz later concisely summed up what transpired under that flag on those days at Iwo Jima: “Uncommon valor was a common virtue.” That citation, and an appropriately large sculpture of that flag-raising, borders the sacred ground of Arlington National Cemetery, where lie the remains of many who once stormed the beaches of Iwo Jima.

Today, for many “Americans,” that flag is a symbol for what they ignorantly and libelously claim is every evil in the world. For the dwindling heroes who looked up at it in places like Iwo Jima, or Anzio, or Bastogne, or the smoldering ruins of 9/11, it is a symbol of what is right in America, of what is worth struggling for, even dying for. For too many, and too often in our government leadership roles, it is no longer the indisputable symbol of “the Republic for which it stands, one nation, under God, indivisible” — but on this day, seventy-six years ago, there was no doubt.

Take a moment today between cute kitty videos and white privilege diatribes to get on your cell phone or iPad and call up that image of the flag-raising on Iwo Jima. Just meditate on it for a while. It’s a Grand Old Flag.

The pictures posted herein were not part of the original article. In verifying the pictures we came across this article about recent corrections to the named individuals who were originally said to be in the iconic , immortalized photo by Rosenthal.

Brooklyn Iowa native Harold Keller was recently identified by the Marine Corps as one of the Marines actually in the famous photo. No one who was previously identified was undeserving of recognition as part of that days events, including raising the flag, but they were not in the famous photo.  It is an interesting story and knitted within is a sentiment we find keenly unselfish and patriotic, sentiments that Colin Kaepernick would not understand.

That sentiment is the suggestion that it would have been better not to have identified any of the raisers, first flag, second flag, whatever. They represented the best traditions of American fighting men, stretched out on the beach, and the trenches, and offshore — gazing up briefly from the fight to the top of Suribachi.

Iowa native Keller never pursued recognition.  To him it was just a photo of some Marines at a time when Admiral Chester W. Nimitz, commander of Pacific Fleet noted of the Americans on Iwo, “uncommon valor was a common virtue.”

2 Responses to A day to remember real courage, “taking a knee”– not the Kaepernick clowns of the NFL