Liberal fascists demonize with the worst of them 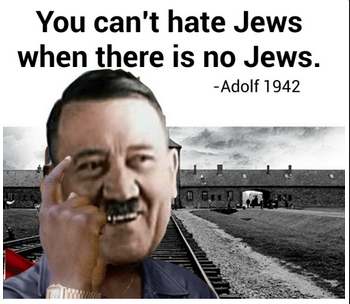 Hitler, Hirohito, Ho chi Minh. These were the leaders of America’s foes in 20th-century wars.

But our soldiers weren’t fighting those leaders, they were fighting soldiers. It’s not easy to kill a fellow human. It is easy to kill a caricature. Therefore comes the slur.

We no longer looked at Germans, as individual people. They became Huns, Krauts, Jerry or Fritz. The Japanese became known by shortened versions of Japan or Nipon. Their skin color, and eye shape were disparaged. The same was done in Vietnam. “Charlie”, “Dink” or the “G-word.” I have to believe our enemies used equally derogatory terms when they spoke of us.

Once the dehumanization is complete, the hate comes easy. Once the hate is generated, the killing becomes easier. But it always starts with the slur.

The same is true in the world of politics. Hate is a powerful tool. Hitler used it effectively in his rise to power. Blaming all Germany’s problems on the Jews and communists, he turned minorities into boogie-men. The yellow star marked those considered sub-human. First the slur, then the demonization, finally the killing. It’s a pattern.

Reading about it’s easy, watching it happen is distressing.

I’ve seen it in American politics. When President Obama was elected, many disagreed with his policies. A subset of that group wanted to hate him. I saw the derisive nicknames, “No-Bama,” “O-Bummer” are a couple that are printable. Hate followed the slurs.

But there was no slur created for Obama’s supporters.

Then comes Donald Trump. The slurs came down like rain. Those who would ordinarily eschew making reference to a person’s skin color, or physical characteristics, had no problem characterizing candidate Trump as an overweight, orange-skinned buffoon with bad hair. When he became President, the gloves came off. “Decomposing jack-o-lantern,” “Angry Creamsicle,” “His Bloatedness,” “Orange Julius” and a thousand more. The pattern repeats itself. The slurs, justifying the hate.

But it didn’t stop there. The “Resistance” had generated so much hate, that one person wasn’t big enough to receive it all. So new slurs were created “Trumpers, “Trumpkins,” “Deplorables,” “Clingers” and “Chumps.”

So here we are, one hundred days into the new guy’s presidency. As I’m reading columnists, letters to the editor, and comments on websites it’s clear that Trump is taking this eviction moratorium seriously, and is living rent-free in the heads of half of America. Hating is an addiction that’s hard to kick.

As I watch this happening in real time, what do I find the most ironic?

These fine Trump haters, even as they spew the most vile, hateful rhetoric, believe in their twisted minds, that they’re tolerant, loving, kind people who only have the best interests of America in their hearts.

The Germans who facilitated the holocaust told themselves the same thing.

I’m wondering when the killing’s going to start?

1 Response to Liberal fascists demonize with the worst of them