Remembering Ashli’s wrongful death, not forgetting her or her anonymous assailant

The photos below from a  Gateway Pundit (TGP) article go back quite awhile, one or more of which we republished some days ago without annotating them further.  We do so here because it has been in our craw and to emphasize justices plight. 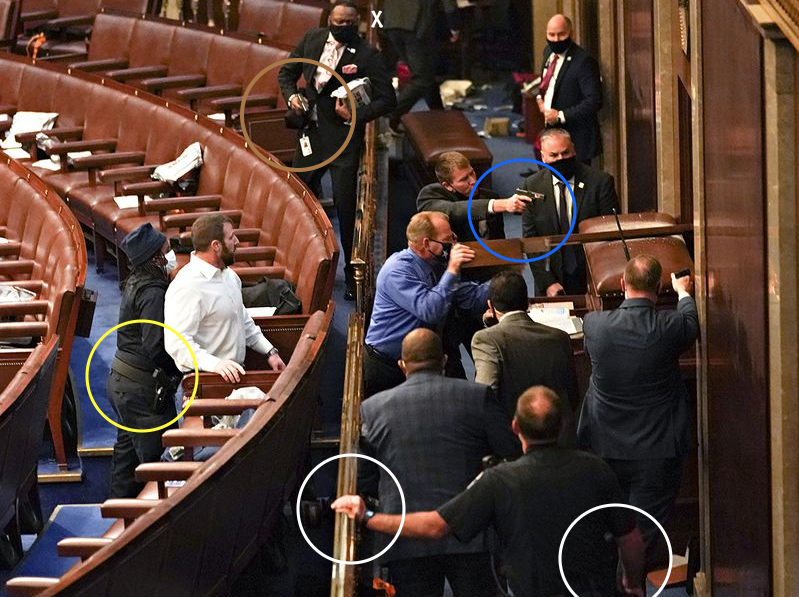 Red circle as per TGP shows the gun hand of the Capitol* policeman “X” identified by that publication as the shooter of Ashli Babbit. Commenters on that site wondered about the appropriateness of the position of X’s trigger finger(red circle) on his drawn weapon with the others in the line of fire as he approached the scene. Note the blue circle, that officer does not have his finger ion the trigger and he is in a much better position to see what was going ion and any perceived serious threat. Note circle yellow. That officer also has a superior vantage point and does not even have her weapon drawn. Note the white circles. That officer apparently also does not perceive any great imminent threat, as his weapon is not drawn. Officer ‘X” supposedly maintained that he feared for his life and for others due to the backpack Ashli Babbitt was wearing — something ubiquitous among tourists and protestors at every turn in DC. See annotation to next photo. 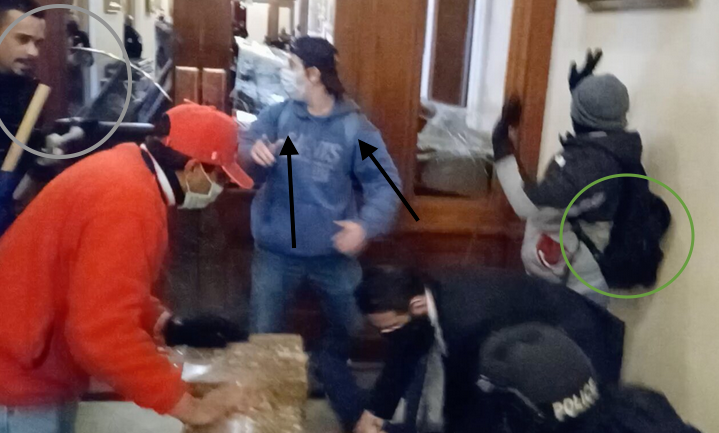 Green circle shows another protestor’s backpack. Black arrows show apparent straps to a backpack on another. All those backpacks and so few bullets for officer X. Strangely no other officer felt compelled to shoot anyone, not Ashli or any of the others armed with backpacks. It appears that individuals are attending to diminutive fallen mortally wounded Ashli Babbitt. Doubly strange is the person circled in grey, indicated by TGP to be notorious John Sullivan a BLM agitator. Perish any thought he was there as an agent provocateur.

Ironic that as in The Hunger Games, Capitol police and media tell you only what works for them. See any similarities?