Another rumor about General Mark Milley V’PAC is privy to 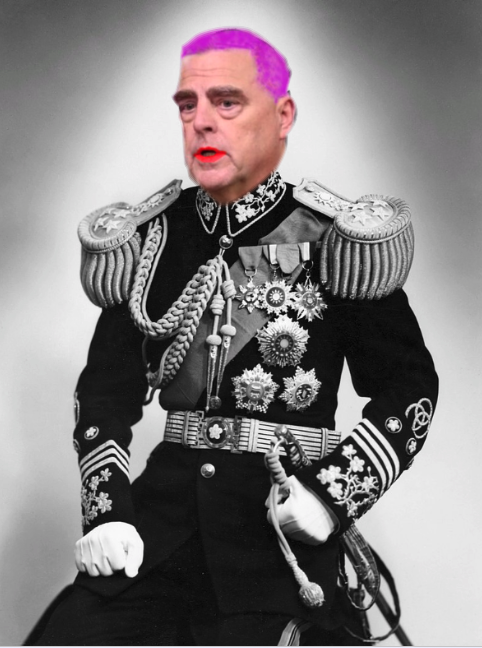 The Chairman was just trying to assure Xi Jin Ping that, even though Trump didn’t like the Chinese, Milley himself had no “yellow rage” and he would let China know if US was planning an attack…to give them time to launch a “pre-emptive” strike.

“It’s what friends do”, Milley explained.

Biden says he has ‘great confidence’ in Joint Chiefs chairman Milley despite him admitting he DID call China and lectured staff on nukes protocol: Trump’s defense secretary says he ‘did not’ authorize calls and general should resign
President Joe Biden said he has ‘great confidence’ in General Mark Milley after he admitted to holding calls with his Chinese counterpart working under Trump
Press Secretary Jen Psaki called Milley a ‘patriot’ when defending him
She said Biden has ‘complete confidence’ in Milley’s ‘fidelity to our Constitution’
Former Acting Pentagon chief said he ‘would never’ authorize the ‘secret’ calls
General Mark Milley confirmed the phone calls took place in a Wednesday statement via his spokesman Colonel Dave Butler
A new book claims Milley phoned his Chinese counterpart to give reassurances two days after the January 6 Capitol riot
Trump accused him of treason and Republicans are demanding he resign
The book’s revelations triggered a wave of concern that Milley had violated the chain of command and endangered national security
Milley was concerned Trump may take rogue action to stay in office
All of the above was detailed in ‘Peril’, an upcoming book about the 2020 presidential election by journalists Bob Woodward and Robert Costa