You remember the bipartisan infrastructure bill, a.k.a. “BIF”* as in Bipartisan Infrastructure Framework, the parliamentary planned stalking horse for the even more gargantuan $3.2 trillion “reconciliation” bill (as in reconciling America to Marxism). 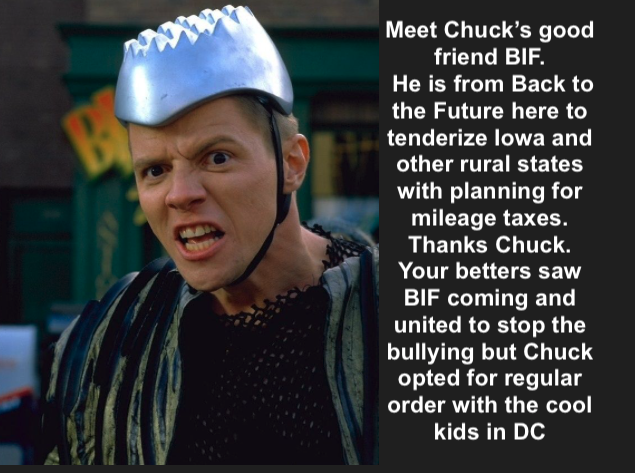 It is still not passed, no thanks to Chuck Grassley but we suspect it will along with a reduced reconciliation bill to a traffic bearing amount of say $1.99 trillion (so it is not quite “trillions” to suit Manchin) on the low end, to say $2.8 trillion which may be the magic number for enough skittish other Democrats. The $3.2 was a high hurdle but likely set high to allow for face-saving compromise to more assuradly achieve basically all they need to implement their Marxist programs including daycare, free college, the big green reset, etc. even if reduced.

‘We Aren’t Bluffing’: Progressives Hold the Line as Pelosi Moves Ahead With Bipartisan Bill

Our Senator Chuck Grassley was one of 16 or so Republicans who championed BIF in the  Senate, enthusiastically we might add, thumbing his nose at the great majority of his Republican colleagues who opposed the bill for what it portends.  Grassley’s rationalization included that his vote was appropriate out of a commitment to regular order but especially some goodies for Iowa (that would come in due course anyway). But hey one needs to be identified as the guy that brings home the pork. Unfortunately for Iowa the pork is seriously tainted (and in more ways than just this).  Call it “trickonus”

Oh Yes, There’s a Tax Hike That Will Clobber Rural Americans in This Infrastructure Bill.