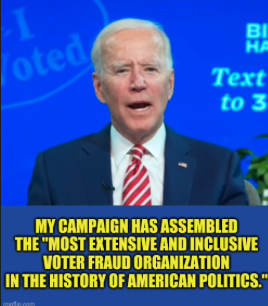 Out of the mouth of imbeciles . . . yes feeble Joe actually said this, letting the truth slip out

Hey Dems, We Got Your Election Reforms Right Here.

We could not agree more. No sentient person has a real problem voting in the United States under existing laws anywhere. Republicans have often accommodated Democrat efforts to undue anti-fraud protections or they compromise on the integrity of the vote, even pushing the two key mechanisms that provide a playground for cheaters — early voting and encouraging vote by mail .  Good-government is not served by early voting outside of a week to ten days before an election and then limited to the traditional reasons of physical incapacity, and necessary physical absence.