Gene Boyd of Davenport wrote the following letter to Mark Ridolfi  editorial page editor of the QC Times. He awaits acknowledgement as to when it will be printed.  We appreciate the intellectual challenge it extends.

Mark:
This is a story that needs to be told. According to the Center for Disease Control (see web sight) there are far more people, literally thousands, dying of AIDS/HIV every year in the United States, far more then are killed in gun violence every year.

If gun registration, gun control is the answer to stopping gun deaths,  should we not make all homosexual men register? Should some kind of visual record be available to the public as to who they are just as some want all owners of firearm to be made public?

According to the Center For Disease Control the vast majority of AIDS is from homosexual intercourse and could be totally prevented with safe sex but they choose to spread the disease anyway.  Why is the media afraid to tell the story? 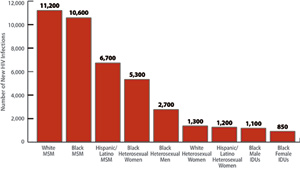 Chart above refers to 2010 data compiled by Center for Disease Control (CDC) regarding new HIV infections. MSM is the acronym used by the CDC for Men who have Sex with Men, do not necessarily be confused with the acronym for Main Stream Media.  We wonder if it is pertinent to ask if, in America, the heterosexual and drug related incidences of HIV are the result of contact with MSM one way or another?  So if registration or licensing is supposedly necessary as a public health and well-being measure regarding guns, why is it not for HIV, indeed homosexual activity? Why is there not a cry for mandatory background checks and licensing prior to homosexual activity?  We are not talking about making it criminal to be a homosexual or stigmatize homosexuality. We are only talking about public safety of course, you know, for the children.

Still another aside.  If the 2nd Amendment supposedly only refers to government sponsored and controlled activity with firearms  . . . how is it that an activity not found in the Constitution, well never understood to be protected by the Constitution at least as a federal right, is definitively not subject to federal or state regulation or even “individual registration” as a health measure?  Did the Constitution only approve of organized bath house MSM activity? Just wondering.  For the record we do not support the liberal logic or politically correct approach to either issue.              R Mall

0
This entry was posted in HEALTHCARE POLICY, MEDIA BIAS, UNCATEGORIZED. Bookmark the permalink.