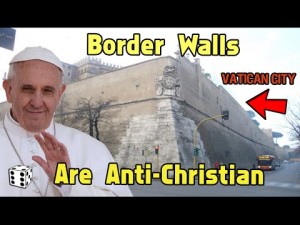 Don Feder, a conservative Jew who is not shy about projecting Biblical truths in the secular media, writes a trenchant article about Pope Francis’ misguided remarks during  his recent trip to the US and Mexican border.    Re-posted with permission from Grasstops USA, bold emphasis ours.

Pope’s Advice on Immigration: Not Compassionate Or Practical For America Or Europe

Think about the logical implications of the Pope’s criticism of a proposed wall on our border with Mexico.

On the Mexican side of the border near Ciudad Juarez on February 17, Pope Francis presided over an outdoor mass that drew thousands, and laid flowers at a memorial for those who died trying to enter this country illegally. (Presumably, America is responsible for their deaths, by not facilitating illegal entry.) “No more deaths! No more exploitation,” His Holiness declared.

No more deaths? Americans are being killed, raped and tortured every day by the refuse that flows through our porous borders. In December 2015, illegal alien Michael Rodriguez Garcia was sentenced to four consecutive life terms for the rape and sodomy of two children in Minette, Alabama. In October, an illegal from Guatemala was sentenced to 40 years for killing a couple and their 5-year-old daughter in a vehicular homicide in Ohio. In San Francisco last July, Juan Francisco Lopez-Sanchez (an illegal and repeat felon who’d been deported five times) was arrested for the murder of 31-year-old Kate Steinle. The Talmud says kindness to the cruel is cruelty to the kind.

In July 2015, an estimated 55,000 criminal aliens accounted for one-quarter of the total Federal prison population. Another 297,000 were incarcerated in state and local prisons. Behind these cold statistics lies a sea of human suffering.

Nowhere is America more vulnerable to terrorist infiltration than at our southern border. In 2014, FOX News reported: “It has long been known that a percentage, albeit small, of illegals caught sneaking across from Mexico hail from terror-sponsoring states.” The same year, Midland County, Texas Sheriff Gary Painter disclosed, “I received an intelligence report that there were ISIS cells active in the Juarez area.”

In February 2015, ISIS boasted that it had inserted 4,000 of its fighters among the refugee horde invading Europe. America is next.

Not all illegal aliens come here to rape and murder. Many take the jobs of low-income workers  especially racial minorities for whom the left professes such tender regard.

In 2013, the Pew Hispanic Center estimated there are more than 8 million illegal aliens in our workforce. Not coincidentally, in January of this year, there were 7.8 million unemployed, according to the Bureau of Labor Statistics. Of course, there isn’t a one-for-one correlation. Still, it’s safe to say that if 8 million aliens weren’t working here illegally, our chronic unemployment problem would disappear overnight.

Pope Francis is consistent. In addressing ambassadors to the Holy See shortly after the New Year’s Eve festivities in Cologne, the Pontiff urged Europeans not to let the sexual assaults undermine the foundation of the continent’s “humanistic spirit.” He implored European leaders not to lose sight of the “values and principles of humanity (apparently, self-preservation is not among them)… however they may prove, in some moments of history, a burden difficult to bear.”

But neither the Pope nor European leaders will bear this burden. Thanks to four decades of mass immigration from countries where women are treated as property and infidel women little better than whores, Sweden now has the second highest number of rapes per capita in the world.

The million “migrants” Chancellor Angela Merkel admitted to Germany in 2015 (for which Time Magazine made her its Person of the Year), will lead inevitably to more Colognes, where over 1,000 of those supposedly fleeing oppression launched fireworks into crowds to celebrate the New Year, and — in keeping with Europe’s humanistic spirit — molested any German woman who came within groping distance.

The burden will also be borne by future generations who will live in societies with growing Muslim populations, with their traditional contempt for women, Jews and infidels in general. In America, compassion will lead to a country that looks less and less Norman Rockwell and more and more Ciudad Juarez.

While Muslims are invading Europe intent on de-Christianizing the continent, in the Middle East, Christians face extinction. The Pope, who has been vocal in his condemnation of border security, has met this genocide with such tepid expressions of concern as “We won’t resign ourselves to a Middle East without Christians,” without suggesting who’s behind the war on Christianity in the land of its birth. Who does he think is cutting off the heads of his brothers in the Muslim world — Donald Trump?

The concept of Christian charity comes from the Jewish Bible. In Leviticus (23:22), the Israelites are told not to harvest the corners of their fields to provide sustenance for the needy and the stranger. (The strangers referred to here were Israelites from other tribes, not Amalekites and Philistines in search of easy prey.) The Bible says we have a responsibility to the poor. It doesn’t say we have to impoverish ourselves or risk national annihilation to fulfill that responsibility.

Like the U.S. Constitution it inspired, the Bible isn’t a suicide pact.

We would suggest the Pope’s border views are culturally destructive, inimical to Christian welfare, Roman or otherwise,  and human health and progress. His views are more The Road to Serfdom, not human progress.

0
This entry was posted in IMMIGRATION, RELIGION AND GOVERNMENT, UNCATEGORIZED. Bookmark the permalink.