Showing up IS the battle — vote Mike Gonzales* 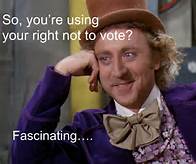 Vote, or contact those who live in Iowa House District 89, to elect Michael Gonzales this Tuesday

This is not a fund-raising letter. In fact there is no amount of money you could give right now to help elect the conservative candidate Mike Gonzales to the Iowa House from West-Central Davenport. This is a get-off-your-butt-and-vote letter to those who need it. Most of you don’t but you know somebody who does so maybe pass it on.

At this stage of the game the only thing to do to avoid seeing Mike’s ultra-liberal opponent elected is to take the few moments necessary to vote in person at your regular voting place on Tuesday. If you do not live in the district a few calls to friends or relatives who do, to encourage them to show up and vote for Mike Gonzales, would be equally good.

As always, any election is about who shows up to vote.

If only 20% or so of Republicans and 15% or so of like minded no-party people had showed up to vote in last month’s special election for the open state senate seat in West Davenport, which Mike ran in, he would have prevailed and conservatives would have increased influence in that body. It didn’t happen, indeed only 12% of registered voters overall bothered to turn out and so a liberal Democrat won. Of course they had to spend more than $100,000 to get their people to vote.

Most of that money to defeat Mike came from organizations with a monetary interest in seeing a low-tax, balanced-budget, community-minded, fair regulation, fiscal and social conservative defeated.

You see, Mike is a dedicated public servant, a LeClaire police sergeant in charge of the patrol division, who knows the workings of government administration and budgeting.  He has lived decades in the district, attending F.L Smart and West High.  He and his wife Amy are raising three teen-agers in a house just off of Locust Street.  He knows the issues and is making the sacrifice to run and try to do the best for the citizens of the district and Iowa.

Maybe it will help motivate your contacts to know a little more about Mike’s opponent Monica Kurth and why conservatives and moderates need to get out and vote.

Besides carrying the banner of the increasingly liberal Democrat Party, Ms Kurth enthusiastically accepted the endorsement of the organization Our Revolution, which is associated with all of the Bernie Sanders socialist dogmas. Those include support for legal abortion on demand at any time at taxpayer expense, opposition to the Keystone and Dakota pipeline economic development projects (a needed improvement over decaying infrastructure); support for ultra liberal immigration policies intended to “dismantle inhumane deportation programs and detention centers”; opposing a border wall; supporting “a roadmap to citizenship for the eleven million undocumented immigrants” and more unsustainable budget busting government programs and mandates than you can shake a stick at.

Indeed, as liberal as the Quad City Times is, its Editorial Board had enough sense to see that Mike Gonzales is the prepared candidate and endorsed him. The QC Times refers to Monic Kurth as “unprepared”, a maven of “partisan talking points,” not a consensus builder. Can you believe it! Even they were not interested in seeing a knee-jerk unprepared liberal (my words) hold the seat. Read the QC Times comments here.*

Mike Gonzales is a fiscal conservative (Mike makes the point that nobody in the district he has talked to wants higher taxes), he opposes more restrictions on Second Amendment rights and supports enshrining our rights to self-protection in the state’s Constitution. Iowa is one of the few states that do not.  His opponent however basks in the endorsement and financial backing of the likes of Maryland Governor Martin O’Malley an extreme tax and spend liberal who has an F grade from the NRA for his extremist anti-Second-Amendment, anti-self-protection views.

Mike will win this time if you show up to vote and/or call your contacts in the district to do so. You can just email them this letter with a short note.

The district is roughly west-central Davenport (west of Harrison Street), more precisely the precincts are D11,D12,D22,D23,D24,D42,D43,D71,D72 and D82. At this point eligible voters in the district must vote at their regular precinct voting place.

The voting hours are 7:00AM to 9:00PM. If anyone is unsure about whether they live in the district or the voting location simply click on this link to the Scott County Auditor’s office http://www.scottcountyiowa.com/auditor/election-central  or phone the Auditor’s office:  563-326-8683   563-326-8631

What is more important than coming up with the few minutes necessary for a bit of civic responsibility? It will take no longer than it does to stop and buy a loaf of bread at a local convenience store.

* This communication is to my personal contact list and expresses the opinions of veritaspac and no other entity is responsible for them. It is done without the foreknowledge of or consultation with candidates or other organizations mentioned.