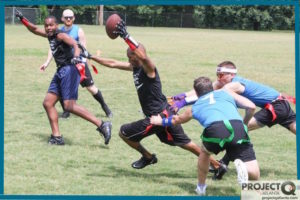 Some questions about this ‘big’ tournament:

Do the sponsoring NE Patriots hope to draft some ‘players’ from the winning team to shore up their flagging prospects for this season?

Will the tournament opening feature the National Anthem, or selected tunes from “Brokeback Mountain”?

If the Anthem, will any of the players take one or both knees?

Will the ‘flag’ be of the “Rainbow” theme?

Are there “match ups” of particular interest: The “Bi-sexual Boomers” versus “Transgender Terrors”? The “Gay Giants” vs. the “Gender Fluid Leakers”?

BOSTON — The National Gay Flag Football League is bringing its championship tournament to the Boston area.

More than 35 teams from across the country are scheduled to compete at a sports complex in nearby Lancaster through Sunday to decide the league’s next national champion.

It will be the 17th iteration of the annual event known as the Gay Bowl , which has been running since 2002 and was hosted last year in Washington, D.C.
Organizers say the New England Patriots became the first NFL team to sponsor the event this year, and that it’s also being sponsored by the Boston Red Sox, Celtics and Bruins.

The league says it aims to “foster and augment the self-respect of all lesbian, gay, bisexual and transgender persons” and to promote respect from the broader community