THE ONE AND ONLY LIBERAL COMMANDMENT 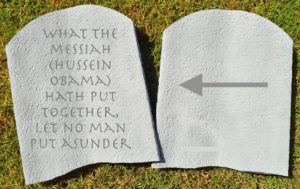 Though unsurprising, intriguing nonetheless. With liberals, ignorant Democrat voters in general, and the radical left, the conclusion is unassailable:

What The Messiah (Barack Hussein Obama) “has put together, let no man put asunder”. The same for all of Obama’s ‘commandments’ of the past 8 years!

Why would this deprive women of needed healthcare (“access to contraceptives and counseling”) and, require the state to shoulder “the additional fiscal and administrative burden as women seek access for this coverage through state-funded programs”, when taxpayers provide Planned Parenthood with half- billion dollars a year to ‘assure’ women’s health?

It is like saying the federal government must fund whatever an individual state wants to fund.             DLH

California wasted no time filing a lawsuit against the Trump Administration, claiming it discriminated against women when it rescinded the Obama-era mandate that requires employers to pay for birth control in their healthcare plans.
According to the Los Angeles Times,

The lawsuit filed in federal court in San Francisco says the new rules jeopardize the Affordable Care Act requirement that employers provide coverage of birth control for employees with no out-of-pocket costs, according to state Atty. Gen. Xavier Becerra, who filed the lawsuit seeking to block the change.

“Therefore, millions of women in California may be left without access to contraceptives and counseling and the state will be shouldering the additional fiscal and administrative burden as women seek access for this coverage through state-funded programs,” the lawsuit says.

The lawsuit also alleges the rule changes violate the 1st Amendment’s Establishment Clause because they allow employers to use religious beliefs as a right to discriminate against employees to deny them a federally entitled health benefit.
. . .
“Donald Trump wants businesses and corporations to control family planning decisions rather than a woman in consultation with her doctor,” Becerra said in a statement Friday. “These anti-women’s health regulations prove once again that the Trump Administration is willing to trample on people’s rights.”

The irony is that Becerra, who’s filed more than two dozen lawsuits against the administration since Trump took office, fails to acknowledge how limited the HHS decision really is; it does not end the Obama mandate as his suit alleges, it simply allows more employers the right to “opt out” of the ACA birth control mandate on the basis of religious or moral objection