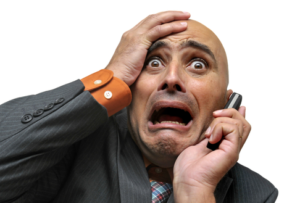 Drudge* [the news aggregator that  writes its own headlines and link verbiage], (other) sensation mongers, and all the usual suspects have been stoking “imminent recession” fears every month (every week) for many months.  They certainly put out fearful headlines and put the articles chosen to link to on a greater plane than sober analysis.

Unfortunately even if the articles are more sober than the headlines, the use of click-bait headlines by news outlets with wide reach entices panic moods in small and even large investors who may feel obligated to sell (or buy) such news (especially if it churns an account). They may feel “obligated ” to respond to market conditions driven by fear rather than knowledge.  Group think and rumor can move markets as much or more than reliable facts.

Some trading signals are hide-bound with the built-in use of economic “indicators”  that may represent factors that have outlived their usefulness or are quite debatable as to providing predictability to the economy or markets. The usual suspects of course will want to emphasize anything that causes people to loose confidence in Trump*.

Another problem with repetition of overwrought recession fears is that some economists are using Google search topics and interpreting them as indicators to the effect that if people are more frequently searching fearful articles, because that is the sort of “news” being highlighted, that is negative indicator.  It is of course a rather self-perpetuating process with built-in bias.

Here are some links and excerpts that read carefully call into question the reliance on bond “yield curves” as a near term recession indicator that seems to be the primary hobgoblin out there today. Do not consider this trading advise, do your own due diligence including consulting a trusted adviser(s) before making trading or other economic impact decisions.

Note that some articles are older than the latest data so keep that in mind but read them for what they say about the concept of certain indicators. Keep in mind that employment is high, inflation is not excessive, people are buying but also saving, and those are what makes economies move.    R Mall

Older news – the recession is around the corner headline grabber has been going on for awhile– Aug 31, 2018:

Natixis: Global Recession Not Imminent, But Then Again …

Are falling bond yields warning of an impending recession?     (excerpt- with bold our emphasis)

David Jane, manager of the £502.8m LF Miton Cautious Multi Asset fund, sees no recession on the immediate horizon. He argued that accommodative monetary environment that was ushered in after the global financial crisis (GFC) has broken the pattern of the bond market’s inverted yield curve being an indicator of a recession.

“US government bond yields are reaching new recent lows while economic data, at least in the US, is surprising to the upside. It’s not meant to be that way but it is,” he said.

“Given that these have been falling, quite rapidly of late, the market must be expecting a slowdown in growth or inflation or both. However, simultaneously, economic data and leading indicators have been improving following last years’ declines, which is inconsistent.”

One possible explanation for this, according to Jane, is that “old economic theory is wrong”.

The multi-asset manager noted that longer-term bond yields were seen as a representation of what the expected long-term nominal economic growth would be, so their rise and fall was expected to coincide with expected growth and inflation. But this model was established in the pre-GFC era, when bond markets were free of “institutional interference”.

Today, however, central banks are big buyers of government bonds and their main concerns is to avoid a second crisis by creating an accommodative monetary environment. Meanwhile, regulatory capital rules and access to cheap central bank funding mean commercial banks have an incentive to hold government bonds while pension fund regulation has created a huge demand for low risk, long duration assets with income.

*This writer’s personal opinion is that Drudge has institutionalized negatives about Trump, that is my main complaint. I used to rely on Drudge for being an aggregator that was not biased against conservatives even if it focused on a lot of cringe-worthy tabloid stuff. The latter is OK if doesn’t fill the bill entirely as it does provide a cultural reflection (hopefully not too skewed).  But a “balanced”  liberal/conservative aggregator is not what is really needed (although that would be an improvement for Drudge many days as to Trump). An honest aggregator that balances by way of being a convenient site for pro-conservative reportage along with Drudge for other convenience he might bring is something we find beneficial.  That exists at The Liberty Daily   which by the way used to be against Trump.  It should be noted that Drudge never claimed to be a “conservative” site that I am aware.  R Mall