Read this lament from the Iowa Corn Growers Association about Trump economic policies then consider our questions and comments and the articles set forth from the folks at Americans for Limited Government.

Iowa corn farmers to Trump: The government put us in “one hell of a bad situation”

The Iowa Corn Growers Association (ICGA) blasted the Trump administration on Tuesday, saying the government has put it in “one hell of a bad situation.”

The trade association hammered President Trump for approving what it called 31 “unjustified” refinery waivers tied to ethanol, along with his year-plus trade war with China. Those two issues, combined with the effects of climate change, are forcing the value of Iowa corn to drop ahead of harvest season, the group said.

“Agriculture is in one hell of a bad situation right now. The government put us in this situation, and they need to help us get out of it,” Vic Miller, a corn farmer from Fayette County, said in a statement. “It’s time for President Trump to make rural America and the [Renewable Fuel Standard] great again. He made promises to American farmers and now it’s time for him to keep them.”

Trump has sought to cast himself as a staunch supporter of American farmers, a group that was part of his core supporters in the 2016 presidential race. But the U.S. agricultural community has been disproportionately harmed by the prolonged trade war between the world’s two largest economies, as China targets farm products in an apparent attempt to hit some of Trump’s main backers.

The trade war has also exacerbated fears of a potential recession in 2020, which would hurt Trump’s reelection prospects. While the president said this month the trade war may cause some “short term” pain, he maintains that farmers will be the “big winners.”

Our Great Farmers know how important it is to win on Trade. They will be the big winners!
— Donald J. Trump (@realDonaldTrump) August 15, 2019

The ICGA statement comes just days after both Washington and Beijing announced increases to their respective tariffs. Though Trump called Chinese President Xi Jinping an “enemy” last week, he said on Monday that China wants to “get back to the table.” 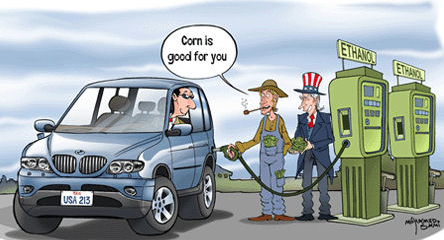 . . . and you have your choice between mandated or super-mandated ethanol

The ICGA says “disproportionately harmed”  — what about “disproportionately benefited” from subsidies, mandates and bad trade deals that directly or indirectly provided for their well being at the expense of ignoring harm to others (other industries market growth and intellectual property) .

The ICGA says “make the renewable fuel standard great again” — to this day no bigger pork trough has been built than what many farmers draw from and their organization still insists on forcing refineries to engage their product at great expense to those refineries and ultimately consumers.

The ecological and economic “science”  behind ICGA members’ downstream product (mass quantities of ethanol from corn) is bad — leaving only the political “science” of logrolling and subsidies or mandates that never stop, behind it — essentially requiring uses that are not needed or good for the planet.

Corn-growers properly want a system of stable markets and perhaps most appreciate honest free markets but the ICGA spokes-holes makes some self-centered charges against Trump’s policies that realistic farmers should challenge them on. Trump is doing what he can (arguably more than he should) to help them but with a focus on the long-term — solving international trade issues impacting all Americans.

Years ago ICGA spokes-holes (we do not include or confuse all corn growers with that organization’s apparat) challenged Americans to be patriotic and support ethanol mandates to allegedly make America energy independent. Well we largely are now, no thanks to corn ethanol mandates. But about that patriotism, consider this articles from Americans for Limited Government:

China keeps 3 million in concentration camps, harvests prisoners’ organs, threatens Hong Kong and Taiwan daily and is arming North Korea. So why are we trading with them?

And ICGA is just too whiny. Consider this article from Rich Manning of Americans for Limited Government:

China and the United States traded punches last week in the ongoing trade dispute, after China announced tariff increases on $75 billion of U.S. agricultural and other goods. The Trump administration responded by ending a delay in the imposition of U.S. tariffs on $300 billion of Chinese goods and by tacking on a five percent increase in overall tariffs to boot.

But President Trump landed a haymaker on Sunday at the previously scheduled G-7 meeting when he announced that the Japanese would replace China’s broken corn purchase promise with $7 billion of agricultural product purchases. The bilateral deal will also allow the U.S. increased access to Japan’s markets for other agricultural goods and some industrial items, and the U.S. will lower tariffs on an array of Japanese produced industrial items, excluding auto parts.

While the Japan agreement falls short of a comprehensive “free trade agreement,” the pact signals that major strides are being made toward a bilateral treaty with the Japanese that deals with currency manipulation and fits the specific needs of both nations, replacing the disastrous eleven nation one-size fits all Trans-Pacific Partnership of which Japan is a signatory.

The multiple billion dollar deal with one of the United States’ closest G-7 allies — Japan has the third largest economy in the world — signals that Trump’s strategy of isolating China to ratchet up the pressure is fully engaged.

However, the Japan trade announcement was likely just the tip of the iceberg from the meeting. With the China-U.S. trade war at the top of the minds of everyone (except host country France’s President Emmanuel Macron), it is safe to assume that conversations with newly minted UK Prime Minister Boris Johnson (fifth largest economy), EU heads of state including Angela Merkel (fourth largest economy) and even a side meeting with India’s Prime Minister Narendra Modi (sixth largest economy) all focused upon bilateral trade with the U.S.

India Times quotes a U.S. government official commenting on the Modi meeting: “President Trump is very much looking forward to his meeting with Prime Minister Modi. They will discuss strategic partnership and how they can cooperate more closely on issues like defense, counterterrorism and trade.” The official added, “We expect the two leaders to build on the very productive discussions they had in Osaka at the G20 summit, as well as the phone call that they held earlier this week. They will look for solutions on the trade front. The U.S. is looking to India to reduce tariffs and open its markets.”

Great Britain’s Boris Johnson will be looking to Washington, D.C. for a quick free, fair, and reciprocal trade agreement as he leads his nation toward their breakup with the European Union, a trade partnership that President Trump has endorsed in the past.

Why does this matter and why has China signaled in the midst of the G-7 meetings a desire to “calm” the trade front?

As Steven Mosher, the author of Bully of Asia: Why China’s Dream is the New Threat to World Order, explained last Friday to this author and Breitbart’s Rebecca Mansour on SiriusXM’s Breitbart News Tonight, “The tariffs have hurt the export sector of economy tremendously in China, and remember, that’s the only sector of the economy that actually makes money, the rest of the economy loses money.”

The Trump trade policy is designed to reorder a world economic system that was built to consign America to the role of a constant donor state, with trade deficits transferring U.S. wealth and industry around the world. In its place, Trump is negotiating a series of reciprocal, bilateral arrangements built upon the foundation of intellectual property protections, lowered tariffs for U.S. exports, and the ending of currency manipulation. These changes will allow U.S. goods—and the jobs created in making them—to compete and win markets around the world.

And at its core, this reordering is about ending the intellectual property theft, forced technology transfers, and currency manipulation that allows China to make their products cheaper than U.S.-made goods in their global and domestic competition against us.

By pursuing trade deals with Japan, Vietnam, and India, along with the just revamped South Korean Free Trade agreement, the 2004 Australian free trade deal, and the waiting-to-be-ratified U.S.-Mexico-Canada (USMCA) deal that upgrades and replaces NAFTA, President Trump is aggressively seeking bilateral arrangements with the nations that worry China most.

What’s more, a quick agreement with Great Britain, and potentially one with the European Union and Brazil, built upon the foundation of intellectual property protection and rejection of currency manipulation will create a freedom framework for trade that China will be forced to join or else risk losing access to the world’s largest economies for their exports.

China’s extraordinary dependence upon exporting goods puts the Middle Kingdom in an unfamiliar position of dependency on the rest of the world to purchase the Made in China label. Already the Nikkei Review reports that manufacturers operating in China, who now face uncertainty about the cost and long-term access to the U.S. market, are diversifying their wholesaler network to countries like Vietnam, India, and Mexico. And the U.S. trade in goods deficit with China is now down more than 10 percent since the beginning of 2019.

Is it any wonder why, in the wake of the Japan trade deal news and a flurry of other trade activity, China partially raised a white flag by calling for a “calm resolution” in the trade fight?

Of course, this is all in China’s hands, since all Beijing has to do is sign off on what their negotiators previously agreed to: protecting intellectual property, stopping forced technology transfers to gain access to their markets, and ending currency manipulation, along with some tariff reductions.

My bet is that China will attempt to extend a negotiating game through 2020 with the hope that President Trump will lose his re-election bid, and thus, allow them to return to their business-as-usual of hollowing out America and making America bow again.

But China’s vulnerability has been exposed. They need the world more than the world needs them, and business flight from China will have a lasting impact both on the Chinese economy and their ability to blackmail the world due to Made in China dependency.

From an American perspective, this is called winning.

. . . the current tariffs are aimed at combating countries that impose tariffs against American goods, which also targets US business and citizens. As we have seen most of Trump’s tariff proposals have caused these other countries to back down producing a net benefit for Americans. As will China, as they are already indicating they will do.  . . .

*the graphic and lower caption not part of original