Impeachment now to be a “feature” of political opposition?

The points she makes are ‘right on’ and more than we will try to present here. 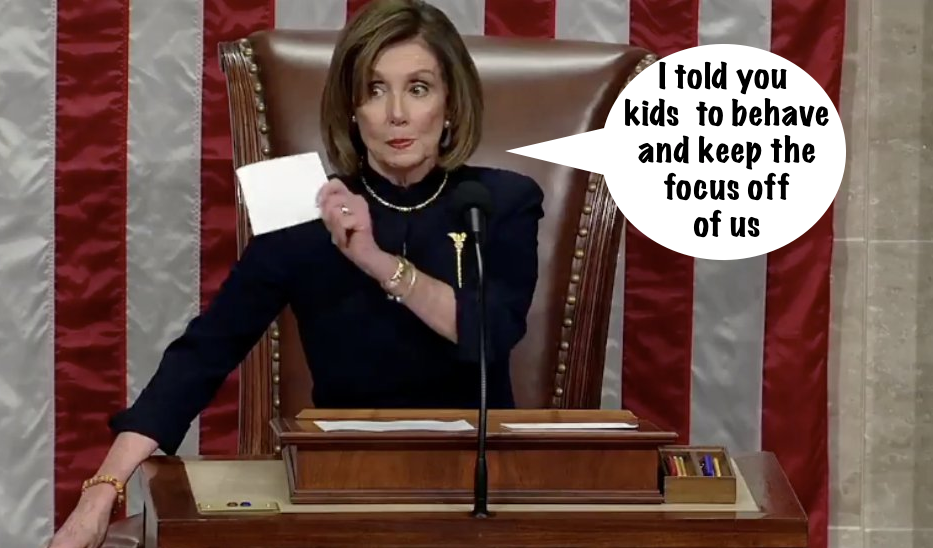 The main point, however, is that Nancy Pelosi is conducting a ‘rolling impeachment’…which is to say, if it never ends, it’s OK with the wicked witch of San Francisco Bay’.

To us, it underscores why we find most career politicians a disgusting, unprincipled, uncivil breed of lowlifes who have little more than total contempt for their own voters. There are exceptions to be sure, but as examples, Nancy and Chuckie Schumer are paramount. And let’s not forget people like “Mittens” Romney, Lisa ‘Murky’ Murkowski’, and former senator, “Mr. Unlikeable”, Jeff Flake.

The latter three find it easy to agree with the unctuous Pelosi and Schumer that Mc Connell is “jeopardizing the likelihood of a “fair” proceeding in the ‘anticipated’ Senate impeachment trial.

That might seem ‘laughable’ but anyone who even suggests it is anything but absurd should be employable only by CNN or MSNBC, or most of today’s ‘news’papers.

Honestly now, how can a ‘normal, sentient’ human being even have a conversation with, or even want to be around, someone as incredibly phony and dishonest (she “prays” for President Trump, and is a ‘devout Catholic who embraces late term abortion’) as, say Nancy Pelosi…or , say, Chuckie Schumer.)

Republicans dismiss Speaker Nancy Pelosi’s refusal to transmit the impeachment articles to the Senate as a weak stunt. They do so at the peril of both the Constitution and President Trump. Senate Majority Leader Mitch McConnell may be a master tactician, but Mrs. Pelosi is no slouch.

It’s now been more than a week since the House impeached Mr. Trump, and Mrs. Pelosi has yet to name impeachment managers or formally send over the paperwork. Democrats claim they are delaying in the name of “fairness,” withholding the articles until Mr. McConnell agrees to new witnesses and evidence in a Senate trial. Republicans are ridiculing the tactic, pointing out that Mrs. Pelosi has no authority to dictate the form of a Senate trial and no leverage over Mr. McConnell.

Both points are true but irrelevant. Republicans err in thinking Mrs. Pelosi’s goal is to craft a Senate trial to her liking—and even in presuming Mrs. Pelosi wants a trial at all.

How would it benefit Democrats for the Senate to conduct an efficient and solemn proceeding? The House inquiry was a farce, riddled with procedural gamesmanship and shifting definitions of “high crimes.” A serious Senate trial would only further highlight the weakness of the House case. It would also require Democratic presidential contenders including Bernie Sanders, Elizabeth Warren and Amy Klobuchar to abandon the stump and return to Washington for most of January, on the eve of the crucial Iowa caucuses—or else shirk their senatorial duty.

Mrs. Pelosi has understood from the start that the inevitable outcome was acquittal. There won’t be 20 Republican votes to remove Mr. Trump from office. So why hasten the president’s vindication? If the goal of this exercise all along was to damage Mr. Trump’s prospects for re-election, why wouldn’t Democrats want to hold an unconsummated impeachment over his head for as long as politically possible?

Think of it as “rolling” impeachment. Every day the Senate doesn’t hold a trial, Mrs. Pelosi and Senate Minority Leader Chuck Schumer are free to argue that the process is rigged. They are already claiming that the Senate’s Republican “jurors” have abandoned impartiality, are actively working with Mr. Trump to cover up his crimes, and are afraid to hold a trial.

This bears no relation to reality and is the height of cheek given the House circus. But it’s fodder for the press corps and it may resonate with some voters. More important, it puts daily pressure on Senate Republican moderates to break with Mr. McConnell. Only this week, Alaska Sen. Lisa Murkowski—solid as a bowl of jelly—said she was “disturbed” by Mr. McConnell’s discussions with the White House over the impeachment process.

As long as the Senate doesn’t hold a trial, Democrats have time to find yet more “evidence” that Mr. Trump is guilty of abusing his power. Witness Mr. Schumer on Monday, highlighting new emails that purport to show military aid was suspended not long after Mr. Trump’s now famous July call with Ukrainian President Volodymyr Zelensky. The emails add nothing of substance to the broader case, but they prompted the media to produce another round of dark headlines about Mr. Trump.

And as long as the Senate doesn’t hold a trial, Democrats can add additional “crimes” to their case against the president. House lawyers this week argued in federal court that former White House counsel Don McGahn must be forced to testify to the House. They told the court the House may “recommend new articles of impeachment” if Mr. McGahn’s testimony included evidence that the president obstructed special counsel Robert Mueller’s investigation.

How long will this charade go on? As long as Democrats can get away with it. Given their impeachment irregularities to date, it’s not hard to imagine Mrs. Pelosi sitting on her impeachment articles through next fall’s election campaign. That would deny Mr. Trump the ability to say he’d been acquitted, even as it assured a constant stream of negative, ever-evolving impeachment coverage.

The risk to Democrats is that the public loses tolerance for a cynical partisan ploy that makes a mockery of Congress’s constitutional duty. But Ms. Pelosi knows the press will dutifully peddle her “fairness” line, and at least for now she can use the delay to energize her base and further damage the president. If the public tide shifts, she can always change course.

Senate Republicans should schedule a trial immediately. Mr. McConnell has a majority to set the rules, and he has history, the Constitution and fairness on his side. Republicans also have a duty to spare the nation from the damaging precedent Mrs. Pelosi is setting. They can end the farce of endless, rolling, partisan impeachment.