Red China to impose a rewrite of the Bible, similar to Pope’s rewrite of doctrine?

Remember when the Pope bowed to China on selection of Bishops? — How’s that working’ out for you, Il Papa? 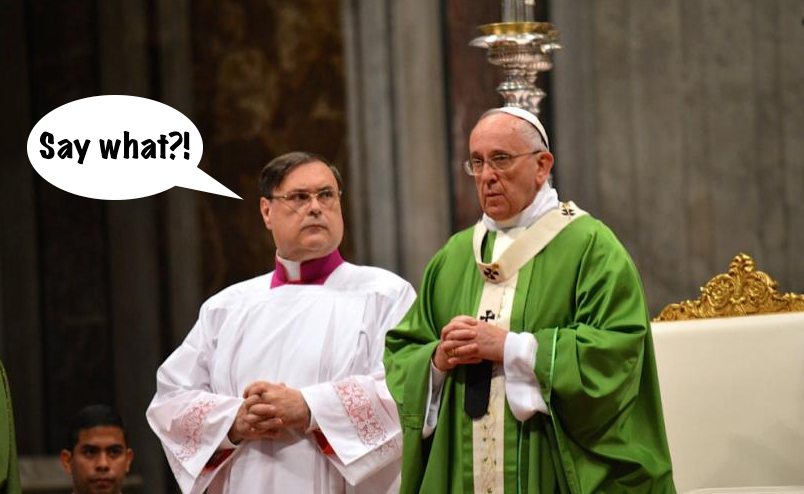 But then again maybe China is simply being more definitive rather than the Popes approach of  clouding issues through re-interpretation — working toward contradiction of accepted tenets.

Re-writing the Bible a bit blatant of Xi so the Pope will be forced to voice his strenuous objection and express how he is shocked, nay, SHOCKED!

Darn it — Il Papa will do the interpreting his way — on his time-table! Too much too soon is counterrevolutionary

Rewriting the Bible admits it is anti-communist — best not to have a communist nation do so — better it just be reinterpreted for the minions in discrete increments, by His Holiness.

Sometimes the revolution must be soft –  as pointed out below — and with an oblique angle – undermine and discredit tradition first, denigrate “taboos” and the people that hold to them.

China Orders Pro-Communist Bible-revision   Admits Bible Is Anti-Communist Church forced to change name to “Follow the Party, Obey the Party, and Be Grateful to the Party”

– After failed attempts to force Christian churches and faithful to abide by its standards, the Chinese Communist Party leaders have determined to re-write the Bible to better reflect their own agenda

– The order to re-write the Bible to be less “radical” comes shortly after an order in late September to local officials in Ji’an, a southeastern province of Jiangxi, to demand the congregation of a Catholic church named “The True and Original Source of the Universe,” to replace a painting of the Virgin Mary with a portrait of Xi Jinping, and to paint over the sign on the front of the church and replace the Church’s original name with “Follow the Party, Obey the Party, and Be Grateful to the Party.”

– Pope Francis has decided to accept the legitimacy of seven Catholic bishops appointed by the Chinese government, a concession that the Holy See hopes will lead Beijing to recognize his authority as head of the Catholic Church in China…

The Pope will do the rewriting

We believe the content of the first two articles below portend the Pope doing what the Bible’s words and two millennia of interpretation will not allow.  The articles are somewhat internecine but very understandable. Francis is a revolutionary Pope and not in a good way.

Pope Francis: Catholics shouldn’t be afraid to change everything about the Church

In reading the above articles we were reminded of this comment of the Pope:

Pope Francis: It’s better to be ‘atheist’ than attend daily mass as hypocrite

Now his outburst seems to use “atheist” as an epithet – but we believe this same pope has also implied that atheists can be good people (we think they are incredibly ignorant and or self-centered and potentially more dangerous in positions of power, but that’s just us).  The tinge the Pope applies seems to be reserved for non-Marxists but in a cartoonish way.  No daily communicants we are aware of live or act the hypocritical way the Pope relates other than the occasional Democrat office holder and some priests, etc.  But then they are hypocrites about other church tenets.

Such hypocrites are allowed to present themselves for Holy Communion for all the world to see them as loyal Catholics (this writer does not present himself for Communion and does not attend Catholic church regularly). Giving notorious people Communion according to the Pope and many Bishops and Cardinals  is justified as useful in bringing such (us) sinners closer to Christ and His church — that’s the theory. Excommunication is somehow to be self-enforcing ( it can be with non-hypocrites), but that leaves the likes of Pelosis, Kennedys, Bidens, Durbins to continue obstinately, corruptingly, adding insult to injury.

The theory is a lame response to the scandal, confusion, false teaching, bad example that allowing such imparts due to the “practitioners” notorious apostasy on fundamental matters. Indeed is that not what excommunication is fundamentally meant to prevent?  Lack of formal use of excommunication as regards notorious individuals on matters the church has identified as crimes against humanity encourages the belligerent apostates and discourages others belief in the sincerity of the teachers and teaching.

The theory mentioned above, endorsed by the Pope and many Bishops and priests is  ironic in light of the Pope’s stated disgust with hypocrite capitalists even being in church. Now Holy Communion is normally presented inside a church as part of the Mass.  So the cartoonish capitalist people the Pope imagines attending mass are hypocrites and to be shamed as such but the real scandal mongers who support legal abortion on demand are just simple people in search of  Christ’s blessing for their everyday lives. Better an abortion promoter in church receiving communion than a capitalist even in the building is the implication from this Pope.     R Mall