Inauguration – all for nothing security other than to “send a message” 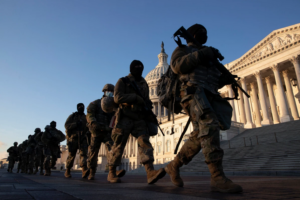 Washington, D.C., has the nation’s highest ratio of law enforcement officers to residents in the nation for cities over 250,000 people, and…

…it isn’t even close. Yet, last night, 2,000+ National Guard troops present for the inauguration, were sworn in as special deputies.

Democrats and the media were also adamantly against the idea that National Guard troops could act in a law-enforcement capacity when President Trump wanted them to go to the southern border when large caravans were arriving. While some were deployed, they were mostly in supportive and administrative roles

U.S. Marshals Swear-In 2,000 National Guard Troops to Serve as Special Deputies
– The overwhelming presence, with Guardsmen carrying arms and now being deputized, flies in the face of a longstanding and genuine aversion to members of the military being deployed against Americans on American soil. When using National Guard troops was suggested to help quell the rioting and violence in major American cities this past summer, the opposition from Democrats and the media was overwhelming.

“. . . no matter what they are telling you, those 26,000 federal troops are not there for your safety,” Carlson said on Monday night’s segment of “Tucker Carlson Tonight.”

“Instead, unmistakably, the Democratic Party is using those troops to send the rest of us a message about power: ‘We’re in charge now.’”

Indeed the illigitimate administration is making an effort to purge conservatives from the ranks, make it a Red Guard of sorts, insure that they are Democrat troops: