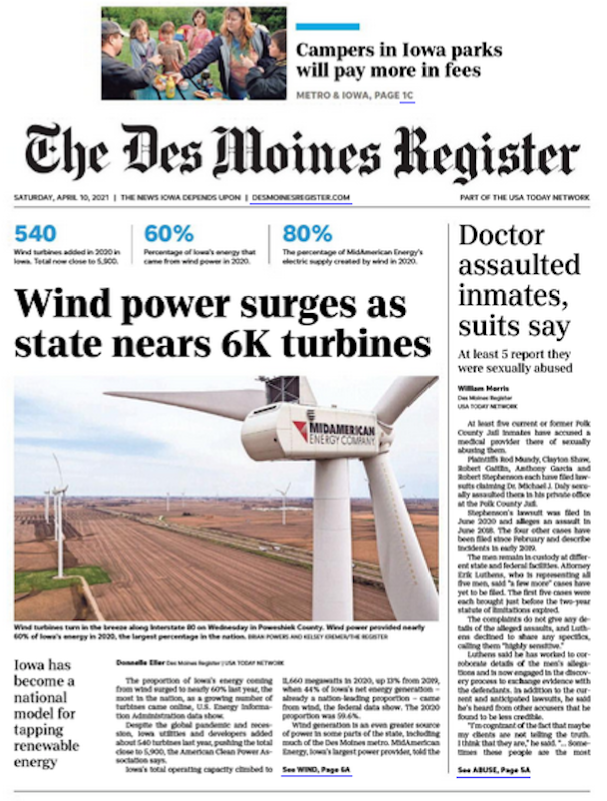 To answer our leading question — by the implications of the hype from Big Wind, the DM Register and other flacks for an energy production regime that is undependable during key energy demand periods after decades of development, environmentally dirty in its own way,  avifauna/bat killing, UGLY, often opposed by communities, tax subsidized – “makes no sense without it”  boondoggle . . . YES!  (in our humble opinion).

Each of the assertions above we are happy to defend.  They are discernible from investigating links we have provided in our blog roll  Energy and Climate at right and by reading commentaries we have posted, found by using our search tool and entering “wind“.

The headline featured article in the Des Moines Register (DMR) on Friday refers to ~~ “60% of Iowa’s energy comes from wind power. ”  In another DMR article recently it is reported that there are “9000” wind related jobs in Iowa.

What is not often reported and it relates to the “utility” of the above figures is that Iowa produces more energy than it uses.  Nevertheless the wind flacks want to the leave the impression that Iowa gets 60% of its energy from wind as in 60% of what it needs, thus implying that Iowa is dependent on wind for power, generating the concern “how could we ever make it with 60% less energy” . . . “wind power must be critical to our well being” . . . !

In reading about the glories of Iowa wind power, we took note of a Daily Koss article that says “since 2008, Iowa has produced more energy than it uses, and roughly 1/3 of our energy production is actually exported to neighboring states.”  We knew Mid-American Energy was in the game of gaming tax subsidies to buy and erect the monstrous turbines and then sell the energy produced at a profit ( gosh, do you think they were returning the subsidies along with normal taxes on income?).  It is referred to as REC sales and Null Energy in their published reports.  In December of 2012 it was already 18.6% of the energy they produced.

Null energy — what an appropriate name — tax subsidized energy production not needed in Iowa sold to other states wanting to claim a percentage of “green” energy that we bet do not need it either.. We did not have recent or an overall figure but thanks to the Daily Koss for accidentally practicing journalism and letting the wind out of the bag of the “necessity” of wind generation to Iowa’s well being.

So if the Koss figure is correct, thirty-three percent of Iowa’s total energy production, not just thirty-three percent of wind energy produced, is sold to others.  Given the ready availability of “fossil” production available we presume the energy bought is the so called green energy, sold as REC’s mentioned above. No need for other states to come to Iowa for fossil fuel produced energy as Iowa doesn’t have that much of it to sell (it buys what fossil fuels it needs for reliable power) and as a matter of political policy they go for the RECs.

So if  60% of Iowa’s produced energy is from wind (DMR article) and a third of its total production is sold out of state and that third likely to be entirely of the “green” component (wind), that means somewhat more than one half of wind energy produced in Iowa is sold to other states.Those states buy it as a matter of green policy mandates of their own but they seem not as interested in going full Monty with such a boondoggle of their own.

Now the question becomes does Iowa need the wind energy produced that is not sold out of state. We don’t have a figure of actual energy use in Iowa compared to capacity from fossil (coal and gas), and what little hydro generation, there is.  After the closing of Palo nuclear generating station near Cedar Rapids sadly Iowa no longer produces any nuclear derived energy.We presume there is fossil capacity now because there have not been shutdowns on scarce wind days.  However with the scheduled closing of coal fired stations located in Iowa soon, and if they are not replaced with gas fired operations (cheep and clean) or clean coal it would seem that Iowa is becoming more dependent and vulnerable to the vagaries of wind  . . . and Texas type problems are conceivable.

Texas had a perfect storm situation arise this winter mostly comprised of earlier incompetence and perhaps corruption.  View post here.  As many turbines as it has operating, dwarfing Iowa’s numbers, wind production there is at a level of 20% of Texas’ energy needs but it had big time problems coping with a cold and ice situation debilitating enough of its energy infrastructure in enough area to cause cascading problems.  Wind turbines there it was demonstrated had clear vulnerabilities to the experienced weather.  But apparently it wasn’t from the cold snap per se because it didn’t get that cold.  It was the ice that more so affected wind generation in Texas.

And Iowa wind generation “60% of our production” apparently would be no less vulnerable to any possibility of an ice-storm blanketing a large portion of the wind farms — perhaps more so as our weather patterns might have an ensuing longer period of cold to hinder melt.  A cascading problem aggravated  in our case by reduced fossil generation capability shut down in favor of wind generation.

Reading this Cedar Rapids Gazette report, the lack of heaters installed on Texas turbines as used in the upper mid-west to keep wind equipment online was not the main problem, it was ice accumulation on blades and Iowa’s turbine blades s are not immune.  The article also appeared in the publication Wind Watch:

Unlike Texas wind turbines that slowed or shut down during the recent winter storm, Iowa’s kept turning.

Texas was hit with ice, whereas Iowa has had extreme cold and snow. And because Iowa’s turbines are installed with heating elements to keep fuel and electrical controls warm, they can operate in temperatures of up to 20 below zero.

“We can get a foot of snow and the turbines continue to run right through that,” said Tony Vaughn, senior operations manager for Alliant Energy, which has about 650 turbines in Iowa. “But you get that mist and sleet, ice can build up. That’ll slow down the RPMs of the blade and it will reduce the output to a point where it will eventually come offline and not produce anything until ice starts to shed off the blades.”

That’s what happened in Texas this week as temperatures in the 20s and 30s caused sleet to freeze on the carbon fiber blades of wind turbines, reducing output and contributing to widespread power outages across the state.

Although Texas has been increasing its use of wind turbines, most of the state’s power comes from natural gas, coal and nuclear energy, the Associated Press reported.

Because subzero temperatures are normal in Iowa winters, companies that develop wind farms here buy turbines equipped with a cold-weather package that include heaters near the gear box, generators and other components in the cell, which is the big box behind the turbine blades and attached to the tower.

“When we design a wind farm and order the equipment, we want to make sure it’s producing energy year-round no matter the weather conditions,” said Geoff Greenwood, a spokeswoman for MidAmerican Energy, which has more than 3,300 wind turbines in Iowa.

Even at the coldest point of this recent cold snap, temperatures in Iowa never got to 22 degrees below zero, which is where turbines start shutting down to protect themselves from damage.

“Our wind turbines have been running even in this extreme cold,” Greenwood said. And since November through April is peak season for harvesting wind energy in Iowa, companies like MidAmerican and Alliant want to minimize time when the wind is blowing but turbine blades aren’t running.

Ice is another matter.

Because there are few effective ways to keep ice from forming on turbine blades, wind farm operators have to decide whether to power down in anticipation of an ice storm. Doing so reduces ice accumulation on the blades and can shorten the thaw afterward, Vaughn said.

“The downside, you may have to turn them off for a whole 24-hour period and maybe the temperatures never fall low enough and you’ve lost out on 24 hours of time to produce power,” he said.

Although some comparisons are made between de-icing airplane wings and wind turbine blades, the systems are quite different, said Hui Hu, an aerospace engineering professor at Iowa State University.

Aircraft fly through clouds of very small droplets of water, while turbines spin close to the ground where droplets are larger, Hu said. Aircraft wings are metal, which conducts heat better than the polymers of turbine blades.

“Many heating mechanisms that work perfectly for aircraft may not be the best solutions” for wind turbines, Hu said.

More promising is a combination of low heat in certain parts of the turbine blade combined with a coating on the blade that would discourage ice adhesion and strength, according to new research from Hu and his research team.

It’s part of a long-term state investment in the wind industry, said Brian Selinger, team leader of the Iowa Energy Office within the authority.

“Wind energy has been extremely good to Iowa and to Iowa’s economy,” he said. Iowa’s wind industry employs nearly 10,000 people and has created billions of dollars in capital investments, he said.

“We have vast amounts of wind rippling across our fields,” Selinger said. “To be able to harness that for economic benefits, it checks all the boxes for economic development.”

This article is the work of the source indicated. Any opinions expressed in it are not necessarily those of National Wind Watch.

The copyright of this article resides with the author or publisher indicated. As part of its noncommercial effort to present the environmental, social, scientific, and economic issues of large-scale wind power development to a global audience seeking such information, National Wind Watch endeavors to observe “fair use” as provided for in section 107 of U.S. Copyright Law and similar “fair dealing” provisions of the copyright laws of other nations.

More on the employment component of the pro-wind hype in a future post.