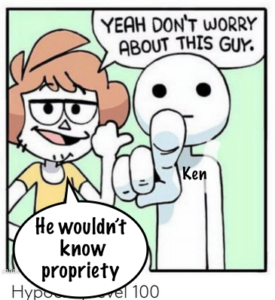 Regarding Supervisor Ken “Karen” Croken’s on-camera demeanor in the referenced Scott County Supervisor Board meeting  (video clip below) — was he making a statement to the community, just boorish, or perhaps verifying that his white male privilege was in check, . . . or  perhaps even present?   You decide.

Earlier this week the Scott County supervisors appointed Kerri Tomkins former Davenport alderwoman to fill the position of County Auditor.  The position was vacated in April by Democrat Roxanna Moritz who announced her departure in March, the announcement only two months into her term. The county supervisors have the authority to temporarily fill the vacancy until the next scheduled general election where the remainder of the partisan position’s term would be up for grabs. Doing so avoids holding a special election which would cost tens of thousands of dollars at a time when due to another key retirement in that office there would be no senior experienced deputy prepared to hold that election.

Voters do get to decide between candidates for the remainder of the four-year term in November of 2022.  That winner will hold the position for the two years remaining of the four-year term until after the general election in 2024 , the normal conclusion of the Scott County Auditor term. The decision to fill the vacancy was the responsible thing to do in spite of the hyperbolic (as if it were unprecedented) and hysterical protestations of the resident Karen, Democrat Ken Croken and his assertive but less “demonstrative” Democrat side-kick Brinson Kinzer.

Democrats still have the option of obtaining 9350 signatures (10% of votes cast in last general election) on a petition which would force a special election for the position.  It is reported that they are pursuing the petition drive which must be completed in 14 days.

What we find hyperbolic when not hypocritical is that Moritz, now departed under cloud of mishandling the most resent election processes, came to office after an interim appointment filled the same office vacancy (in reality it was essentially vacant for a lot longer, but that’s another story) created by the death of former multi-term Democrat Auditor Karen Fitzsimmons. Moritz, then a Scott County Supervisor herself, was the only one to oppose the interim appointment — we suspect on the basis she knew Fitzsimmons would not be likely to run again, wanted the position and either was disappointed or feared facing an incumbent (if not for herself, another Dem).

Interestingly the other Democrat Supervisor serving at the time (the board is made up of five persons elected in staggered terms) — Jim Hancock — voted for the interim appointment of Wes Rostenbach, the responsible thing to do. Democrat Moritz ran in the next general election, 2008, (in which Rostenbach declined to run). Moritz won and was reelected three times in the latter races against very weak if any opposition from Republicans.  Democrats know the position’s importance and think they own it (have for a long time).

Republican Kerri Tompkins has adequate credentials including project manager experience, public budget and accountability experience as a former Davenport Alderman.  Democrats offered no one as a substitute to be voted on by the Scott County Board of Supervisors at the meeting. They objected to the vote to fill the position for the partial term until the next general election hoping to delay until governing statutes would force a special election without them going through the drill of a petition process.

Given that it is tradition and appropriate to fill the position by appointment in these circumstances the community should dismiss their partisan crocodile tears. Democrats can have their shot at the position if they are successful in ginning up enough petition signators in the two weeks they have to gather them, winning the resultant special election, or actually finding someone credible to run in the next general election.

By the way, the hypocrisy of the Dems extends from their very recent maneuverings to have Republican Supervisor Maxwell’s seat declared vacant on the slimmist (slimiest) of pretexts. They wanted the seat declared vacant in order to be replaced in hurried fashion in order to be in a position to rely on Moritz’ remaining presence to vote to fill the trumped up vacancy on the Board prior to her departure. Dems would then be in majority position to appoint her successor.

These people are insufferable, and in Croken’s case, also foul, rude, oblivious, but hysterical in the process.  The video clips below show Croken either making a testicular statement or just being boorish in crude indifference to the camera, his colleagues and the viewing public.  But it is funny.

Embedded above is a 30 second clip from the 45 minute or so special Scott County Supervisors  meeting for the purpose of filling the Scott County Auditor vacancy. Click on the arrow, wait to load and look closely. Supervisor Croken, insufferable throughout the meeting, is shown sitting, then standing up to walk off camera and returning a few seconds later to engage … himself.  The clip above shows him in an array with the other supervisors. The additional embedded clip is the same display focused on him.

The entire board meeting can be viewed at the official Scott County Board of Supervisor archived meeting site at this link.  The referenced clip begins at the 27’25” or so mark. If you watch the whole thing as we did  you will also be treated to Croken playing the white male shaming card  — as if Dems offered a woman and or a person of color and Republicans didn’t offer a female candidate.