Trump should have let Grassley stew in his juices awhile 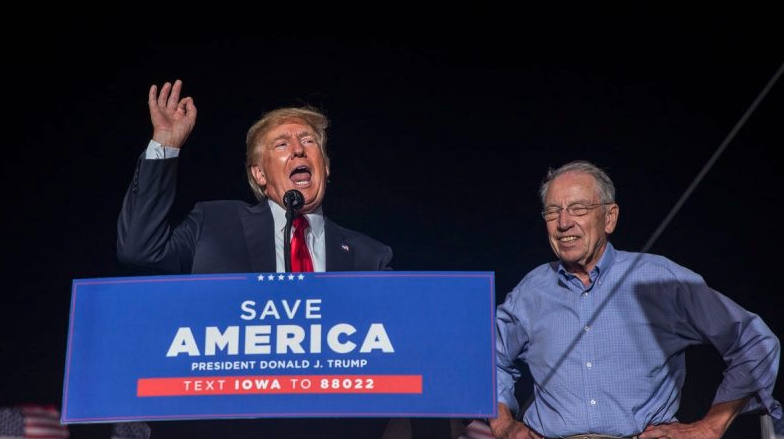 Donald Trump’s association with Chuck Grassley at Trump’s Save America rally last Saturday in Des Moines was a little too soon in my judgment, given as someone who came to be a Trump admirer, ofttimes champion but who is not necessarily a Trump supporter in the Iowa caucuses IF a bold capable electable Save America oriented alternative is possible.  Such a candidate should be looked at for political strengths and weaknesses including any benefit to useless drama (good drama is motivational) when Trump allows himself to become the issue rather than Democrats and their warped policies. Trump is very important to Saving America but good CEOs realize when it is not the best to have themselves as the point man even when Democrats are imploding. Personally I think Trump’s magnanimous endorsement is enough for the next President.

It is likely more than enough for Chuck Grassley who would be odds-on favorite to win the Republican nomination and likely the Senate race again even without it, given the money and name ID he has and his inherent ability to counter his age issue.  The only thing that Grassley could do to screw things up for himself would be to be perceived as being a Washington creature, weak even pathetic in the face of extraordinary circumstances and disdainful of Trump and his supporters —  all of which he has managed to do — but which Trump has now saved him from.

My view is that there has not been enough water under the bridge and too few if any “clarifications” issued by Grassley to take the edge off both the irony and the facileness of Grassley’s  appearance on the stage for Trump to give him his blessing after the number Grassley did on Trump (and Trump supporters) post-election.  That number included spreading gross distortion of Trump’s words which also impugned his supporters,  the frailty he showed toward vibrant protest and especially the unjust finality he insisted on regarding an election fraught with all manner of clear illegalities, profound uninvestigated anomalies, judicial charades and legislative unconstitutionalities that defrauded Republicans and the nation.

But there was Senate reelection hopeful Chuck Grassley on the stage with Trump at the Iowa State Fairgrounds accepting Trump’s support.  The irony, even for politics, was not lost on some conservative pundits and chortled over by dominant liberal media in the state and elsewhere. The chortle hiding the choke they felt knowing any chance of unseating Grassley was likely over.

Now perhaps this is but a truism in management of large organizations whose leader is brought in with the goal of a major shake-up —  but Trump’s biggest impediment to even greater success for his presidency related to his personnel picks, for campaign positions and presidential staff,  department heads and his unnecessary alignments. Fortunately for the country Trump’s solid sincere capable picks in many positions outperformed the clunkers, ingrates, grifters, courtiers, incompetents, cowards, weak-hitters, underminers, and traitors he saddled himself with, unschooled in the ways of Washington as he was.

Whatever the draw or blindness Trump has toward political opportunists whose loyalty is thin at best, whose understanding of Trump’s persona and the country’s tenor is weak, is regrettable. Grassley fits in that opportunist category.

How can I say that about someone with Grassley’s  reputation? Because Grassley pretty much admitted as much, as quoted in the Des Moines Register, after declining the opportunity to revise and extend his remarks about Trump post election.

“I was born at night, but not last night,” he said from the stage. “So if I didn’t accept the endorsement of a person that’s got 91% of the Republican voters in Iowa, I wouldn’t be too smart. I’m smart enough to accept that endorsement.”

Grassley’s admission, combined with his failure (along with much of the Iowa GOP weak-hitter establishment) to repudiate his own comments about January 6 related to Trump and his supporters —  his weakness as regards constitutional and political remedies to election fraud resulting in such an easy walk for people intent on essentially ending the republic and our national sovereignty — and his further facilitation of that “reset”with a key vote supporting parliamentary maneuvers on an unnecessarily gargantuan spending bill opposed by most of the GOP caucus with the excuse of  “regular order’ (as if such is binding in any way and especially when regular order means nothing to Marxist revolutionaries) — combine to make Trump’s endorsement of Grassley inappropriate without more from good ol’ Chuck.

I am not sure if Trump is being magnanimous, or is being given pathetic “you must do this now” advice — but without more from Grassley Trump’s endorsement suggests insincerity about his own statements . . .  as if it is OK to say anything / do anything  — it doesn’t matter — its just politics. It creates a tendency to deflate interest in defending Trump if he rewards his accusers and fraud deniers.

No politician is perfect but our country is at more risk today because Chuck Grassley and  “conservatives” like him acted as the DC establishment wanted. The Grassley types cannot claim to be watchdogs of the republic when they hardly barked at the breaking and entering of our election processes and “moved on” to hump the leg of a table set to feed those malcontents.  All of it for the calm of a few scraps from the table for their state.

Grassley’s comments days and weeks after the January 6th rally contained untruths and constituted reckless disregard because the truth was readily available about Trump’s speech — all one had to do was listen to a recording or read a transcript to clearly see there was no incitement of riot – just the opposite. Trump was in no way guilty of anything out of bounds expressing his views about the legitimacy of the election. He called for a peaceful demonstration.

Further, Grassley engaged in reckless and pathetic pearl-clutching elitist beltway rhetoric about some regrettable excesses displayed by a few when a balanced appraisal should have emphasized that it was an overwhelmingly peaceful rally and demonstration and the excesses were just that.

The ill-advised (not by Trump but perhaps by the FBI) people that entered the Capitol buildings, many without objection by police as there is video showing them being ushered in,  had no serious characteristic of an insurrection.  Any student of history or observer of current events knowing that police contend with far worse than exhibited that day every week by ANTIFA and BLM.  The characterization of even the most aggressive protestors that day, including their regrettable vandalism and trespass, as an insurrection engages in something worse in my judgment —  calumny about a cause and cheap grandstanding.

Further still, with reckless disregard Grassley implicated deaths coincidental to the rally (possible at any large protest rally of tens of thousands of people) as intrinsic to Trump’s comments. Grassley to this day that I am aware of has failed to repudiate his comments and failed to correct that the only death that day with actionable culpability was at the hands of one of Grassley’s pretorian guards who ought to be charged with a serious species of criminal negligence and wrongful death having shot an unarmed diminutive female of no threat to himself while also hazarding his own comrades in arms.

Trump does not need Grassley’s support in Iowa. He is more popular than Grassley among Republicans. Any further bad-mouthing by Grassley of Trump would only hurt Grassley, Grassley knows that, seeing himself below Trump and Governor Reynolds in job approval numbers as well. The gain is primarily to Grassley who is (at least was) faced with a credible primary challenge made so in part by Grassley’s swamp fever.