Words from and about the ‘Wise Latina’ Justice Sotomayor 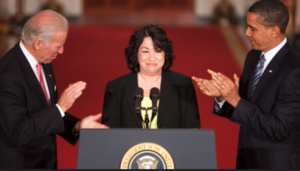 Quotes from possibly, the dumbest Yale grad in that Institution’s history (and that’s saying a lot). Actually, whether or not the former is true, Sonia Sotomayor has legitimate claim to being, not only the dumbest, but the most arrogant Supreme Court Justice in the history of the Republic.

Here are just a few of her ‘WISE” COMMENTS, DRAWN NO DOUBT FROM THE “RICHNESS” OF “HER LIFE EXPERIENCE” .

The first is from her remarks before the Senate at her confirmation hearing. The second is from the Court’s hearing on the Mississippi abortion law which bans killing the unborn  after 15 weeks.

The third of many such statements by the learned Justice Sotomayor was also from that Court hearing and is a not-so-subtle disparagement of her fellow Justices, accusing them of being just what she herself is, an ideologue nominated for the Court by an ideologue…talk about STENCH”!…Sonia, go take a shower!

And, finally, a quote from left-leaning legal authority, Laurence Tribe, who, remarkably, says what many others believe to be true…Sonia is not as bright as she thinks she is! (No news there.)

Her majesty about herself:

“…I would hope that a wise Latina woman with the richness of her experiences would more often than not reach a better conclusion than a white male who hasn’t lived that life.”

Her majesty about physiology:

SOTOMAYOR: “There is about 40% of dead people who if you touch their feet, the foot will recoil. There are spontaneous acts by dead-brain people. So I don’t think that a response to- by a fetus necessarily proves that there’s a sensation of pain or that there’s consciousness.”

This is just as much a good reason not to use “brain death” —  a measure on a machine based on and relying on a calibration – as a sole criterion for death —  rather than brain (responsiveness) and heart function (which the fetus has both). The difference, lost on Sotomayor, is about checking out vs checking in for one thing but clearly if what she says is true the stimulus is still a pain stimulus that the brain perhaps can no longer interpret but it is a sign of life, of pain processing. In a dead person for a period of time a sign of life passing, in a newborn, a sign of life incipient, a developed self preservation response (will to live) as strong as that of a newborn child outside the womb. 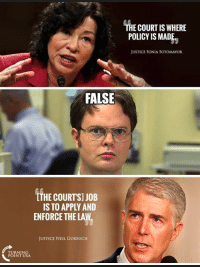 Sotomayor, who was nominated by then-President Barack Obama, said that tossing out the landmark rulings establishing abortion rights would tarnish the court’s reputation and open the floodgates to other challenges to well-settled law.

Never mind that that is how poor, ahistorical, constitutionally problematic decisions are fixed and obviously there is nothing well-settled except in her biased mind about abortion/right to life jurisprudence.

Then-President Donald Trump successfully nominated three Supreme Court justices during his four-year term, giving the conservatives a 6-3 majority.
Sotomayor, who was nominated by then-President Barack Obama, said that tossing out the landmark rulings establishing abortion rights would tarnish the court’s reputation and open the floodgates to other challenges to well-settled law.

“Will this institution survive the stench that this creates in the public perception that the Constitution and its reading are just political acts? I don’t see how it is possible,” she said, while questioning Mississippi Solicitor General Scott Stewart.

“Bluntly put, she’s not as smart as she seems to think she is, and her reputation for being something of a bully could well make her liberal impulses backfire.” (Laurence Tribe, liberal Harvard law professor on then nominee for SCOTUS Sonia Sotomayor)