January 6th comments: Ted Cruz is sending a signal — and not a very useful one whatever his intent 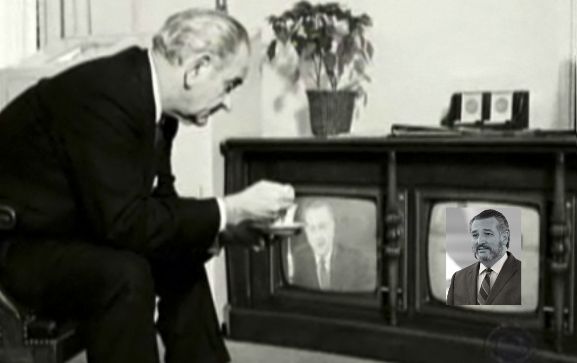 One Texan to another, I don’t know what to tell ya Ted*, but if you’ve lost Liberty Daily . . .

Below are two somewhat different takes from your editors at V’PAC —  neither flattering toward Cruz for his statement in the Senate referring to Jan. 6 people inside the Capitol that day as terrorists.

The first is from dlh who offers that he wrote this after hearing the interview of Sen. Cruz by Tucker Carlson where Cruz was given the opportunity to explain himself:

I don’t care ‘what happened to Ted Cruz” His remarks on the floor of the Senate did it for me. This is one more story in reference to Ted’s “performance”, and the writer gives his theory of what motivated Senator Cruz to enrage what are now his former admirers and supporters (of which I am one).

This has got to be one of the most embarrassing turnabouts by a politician in a long time.

Once known for his combination of great intellect and unique courage, Ted Cruz, in a single speech, transformed himself into an ignorant, cowardly oaf for whom I wish him all the worst, politically.     dlh

January 6, 2022
What happened to Ted Cruz?
By Thomas Lifson

I know from the volume of email I’ve received on it that Ted Cruz’s comments on January 6, 2021, calling it “a violent terrorist attack on the Capitol” have outraged many conservatives. Ted was once the darling of intellectually inclined conservatives, but I think the bloom is now off that rose.

Tucker Carlson used video of Cruz’s comments as the keystone of a segment on how Republicans are being cowardly and granting Democrats their false premises on the riot at the Capitol being an insurrection or even a “terrorist attack.” As Tucker put it, he was delivering talking points for Merrick Garland.

So, what could possibly have happened to Ted to turn him into a shill for Democrat talking points?

Is he feeling pressure over having protested voting results and fears being branded as an insurrectionist? Maybe he thinks Mark Elias’s scheme to disqualify Republicans from running for office is a real threat to him. But he should know that appeasing the enemy does not work.

Has he been in the Senate too long, and now wants to avoid confrontation with the Democrats? “Comity” is the word that used to be used, but these days the Democrats are offering none of it. They want to destroy the filibuster to ram through voting procedures that would enable perpetual cheating with mail-in ballots being counted for days after the election.

My guess – and it is only speculation – is that he has given up on his quest to become president and now aspires to join the Supreme Court. Perhaps he is thinking of confirmation assuming a Republican wins the presidency. This would his way of avoiding a charge of radicalism.

Whatever his reasoning, I am deeply disappointed in him.

“Sloppy, dumb”…words Ted used to excuse his remarks on the Senate floor this week.

“Limited number of people who assaulted cops”, he said; “That’s who I was talking about.”

Ed. Note: Gary Bauer does not seem to be buying the excuse either: Ted’s Bad Day . . .

Both dlh and myself have been great supporters and admirers of Senator Cruz and supported him in the 2016 caucus and primaries.

I think it is obvious that Cruz stepped in it big time, no way around it. It was worse than a mistake it was a blunder.

Having watched Cruz make the “terrorist” statement and the Tucker Carlson interview with him the next day, I get a bit of an impression that Tucker may have been gunning for him, but not that Cruze didn’t have it coming.  Tucker absolutely grills him and does not let him off the hook over the word choice “terrorist”(I would have pushed him on the word “solemn” as well).

I agree with Tucker that Cruz is a wordsmith so Cruz has his own precision to overcome, but I guess I have enough reserve of appreciation to accept his mistake as ill-considered (like Tucker I doubt it was a mistake at the time) even pathetic to apply the word “terrorist” in the circumstances because I agree with Tucker that they were not terrorists.

The offer of a mulligan to Cruz if his mea culpa is properly expressed and accompanied by issuance of remarks from the floor — the privilege to revise and extend his remarks —  that the J6 events did not comprise terrorism or an assault on democracy or any of the other  lies and hyperbole of the left.  My sentiment extends from Cruz being one of 11 senators who on the floor of the Senate on  January 6, 2021 called for a delay in certification of the Democrat steal for ten days pending an audit.

The reason I do not like the word solemn is not knowing what Cruz means the solemnity should apply to. If he means solemn like some people refer to Pearl Harbor than no — that is another bad choice of words. I think Cruz really needs to “explain” more than he has done.  Overwrought Jan 6 events by what amounted to a 1 or 2 percent off-shoot of a huge peaceful demonstration of people very much concerned about true democracy and opposed to voter fraud are just that. There was no insurrection or terrorism and there is nothing solemn about widespread election fraud.  Every scuffle with a policeman does not constitute terrorism.  To say so diminished the meaning of the term or produces ominous civil liberties implications.

We will appreciate reader reaction to our comments.

*Liberty Daily is a publication we rely one as a conservative news aggregator. Readers might remember that it was started largely if not entirely to support Cruz in the face of assaults by the Drudge Report.  It now  seems to be really going to town against Cruz.   The picture shown is with reference to a famous (perhaps stock) photo of President Lyndon Johnson who is quoted as saying when he heard CBS anchor Walter Cronkite  issue a negative report about the results of the Tet Offensive by communist Vietnamese (supported by Red China and Soviet Russia) which was in reality a military defeat for them:  “If I’ve lost Cronkite, I’ve lost Middle America.”