Al and Mike Franken — handsy guys, they must be brothers, certainly birds of a feather?

Grassley’s Democrat opponent credibly accused of forcing himself on a woman underling. 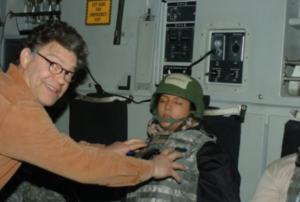 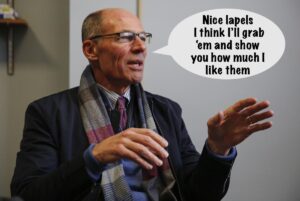 Former Mike Franken Campaign Manager Alleges He Made Unwanted Advances Toward Women, Including Her

We will be waiting for the Des Moises Register and Lee newspapers in this state to report the news sensationally and not let it die, soliciting commentaries and editorials about how women must be believed.

Michael Franken  is a retired Navy Vice Admiral.  That he is such a lefty, even more so than Al Franken of the same surname who is the former Minnesota Senator of ill-repute …  confirms what we fear about the weakening, some would say historic disintegration, of our military …  spiritually, culturally, intellectually. And now it seems  the not so admirable Admiral while retired from the Navy is still on active duty with the Vice part.

Michael Franken is credibly accused of sexual battery even if the Democrat run City of Des Moines’ police department and the Democrat run County Attorney’s office has closed the matter. You see women must be believed, especially Democrat women. You know that.  We heard it about Anita Hill, about Christine Blasey Ford.

But here’s the thing, the Vice Admiral’s accuser, Kimberly Strope-Boggus, is a Democrat accusing a Democrat and is also Franken’s  former campaign manager* who essentially brought him through the contested primary helping him post a surprising win and margin over the early favored Greenfield, making sure every Dem primary voter understood he was the progressive women’s dream.

Strope-Boggus, had NOTHING to gain by filing the police report as she did.  She is now done in Democrat politics and must have known that. She may be batsh*t crazy, and the incident never happened BUT THAT IS NOT THE STANDARD FOR DEMOCRATS AND THEIR OPERATIVES IN THE MEDIA BEFORE REPORTING AN ACCUSATION AND DOING ALL THEY CAN WITH IT .

That she is apparently a lesbian (her spouse is named Becky and referred to in the article as “she”) makes her even more convincing to the extent of at least tripling her truth-telling cache as far as the aforementioned leftist media in this state are concerned and all those Democrat voters. She absolutely must be believed and it makes Michael that much more icky. Unfortunately as revealed in the articles linked to above, the Democrat machine is working her over pretty good.

Minnesota’s Al Franken (now moved back to New York) resigned from the Senate in disgrace over multiple accusations of sexual misconduct. Michael Franken according to his former campaign manager as related in the articles (no doubt the person for women on the campaign trail to report such matters to) has said she is not the only one victimized by Franken.

Again, it must have happened because that is the Democrat mantra.

The similarities of Michael and Al Franken  do not end with being icky uber-liberal Democrats or with being credibly accused by Democrat standards of sexual exploitation, or of being humorless.  We remember Al’s nauseating skits on Saturday Night Live as Stuart Smalley the self-help guy and his line (later a book) “I’m Good Enough, I’m Smart Enough, and Doggone It, People Like Me!”  Michael Franken must have channeled that in creating his 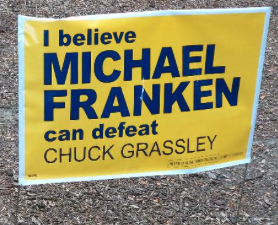 yard sign message “I Believe MICHAEL FRANKEN can defeat  Chuck Grassley”.  It reads like a self-help power of positive thinking phrase, something Stuart Smalley would come up with.

As  long as we are talking about skits, ours would be:

Al and Mike, sit’n in a tree, first comes the pounce, then kiss’n ’em with glee

And we have a recommendation for a new yard sign, hat and T-shirt perhaps — I Believe Kimberly