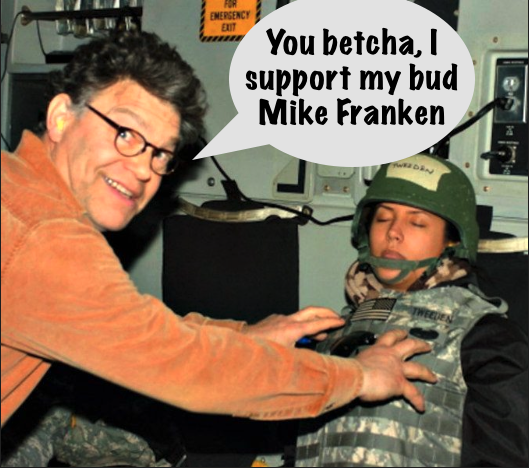 In just an astounding show of timing – The Mike Franken campaign notified the world of their endorsement by Mike’s spiritual brother former Minnesota Senator now New York City resident Al “Bazonga” Franken.  No we did not make the announcement up.

Senators Ernst and Grassley call for Franken campaign  (Mike’s not Al’s this time) to come clean and drop any threat of a non-disclosure limitation Franken’s intimidation team held against Franken’s accuser who must be believed. (See our previous post).

Our view — If non-disclosure agreements (NDA) or non-disparagement agreements on matters of sexual assault are valid that is an absurdity in the law (we are informed an NDA covering up such matters are not valid). Exposing a pattern of unwanted advances toward women should not be either and that is the point of comments by Gretchen Carlson and Iowa Senator Joni Ernst, both victims of sexual predation, also joined by the Grassley campaign.

On such a burning matter for progressive women why is the left not up in arms over “Vice Admiral” Mike “Masher” Franken and his campaign team using NDA as a shield for predation?

Franken now says there is no such NDA. Well then why did his “team” tell his accuser ‘s lawyers that there was??

Reading the police report filed by the female former campaign manager to Franken the assigned officer asked her a ridiculous question as to whether she considered Franken’s grab and kiss “aggressive or sexual.” That would seem to be a question of legal distinctions  which a criminal complainant should not be expected to opine on having already complained of the forceful grab.  It is only relevant as to the type of charge (something related to assault vs something related to sexual assault).  Having issued a complaint that Franken grabbed her by the lapels and pushed his face into hers to kiss her, unless Franken does that to men that would seem to be an assault and sexual in nature. Presuming Franken to be heterosexual, grabbing a woman to plant an unwelcome kiss on the lips is sex linked.

Well the Cedar Rapids Gazette, reprinted by the QC Times, has reported on the story, in the QC Times version in a page 4 — below the fold — using an obscure title for the article sort of way

The Gazette did a follow on story, not as yet anyway in the QCTimes print version

Grassley Campaign  was not to be trifled with: